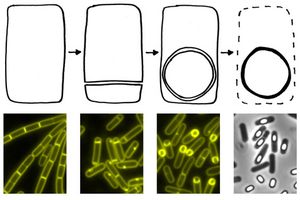 Spore formation in B. subtilis begins with an asymmetric division generating a lar­ge mother cell and a small forespore cell. Initially, these two cells lie side-by-side but later in development the mother cell engulfs the forespore in a phagocytic-like process to produce a cell-within-a-cell. Pic­­tures by D. Rudner. Source.

When Bacillus subtilis sporulates, the cell destined to make a spore divides asymmetrically; one cell, the "fore­spore," becomes the spore; the other, a short-lived sa­crificial "mother cell." You’d expect that a nucleoid would be partitioned be­tween these two compartments before they even think of dividing. Not so. Cell division and chro­mosome segregation get out of sync and the septum be­tween the two cells narrows before the DNA is complete­ly transferred into the future spore. Never mind why this is so – the reasons are elusive. Regardless, about 2/3 of the DNA destined for the spore has to traverse a narrow pore in the forespore septum. A protein called SpoIIIE (names like this one mean something to sporulation mavens) is deeply involved and acts as a DNA translocase.

How does SpoIIIE know to push (or pull) one way and not the other? Does it recognize sequences in the DNA (model A), thus being potentially able to move DNA across the septum in either direc­tion? Or is it part of a complex that acts as a one-directional winch (model B)? In model B, the di­rectionality would set by assembling the winch on just one side of the septum (see figure below).

Eric Becker and Kit Pogliano dreamt up a way of an­swer­ing this question. How they did it is mighty clever (and somewhat intricate). To determine the position of SpoIIIE relative to the septum, they fused the leucine zipper do­main (LZ) of cFos to SpoIIIE and fused the LZ of cJun to GFP (green fluorescent protein). cFos and cJun are bio­logically irrelevant proteins here, but they are used be­cause their two LZ domains strongly interact with each other. Using cell-specific promoters, synthesis of cJun-GFP can be turned on in either the mother cell or the spore compartment. Ergo, they could localize SpoIIIE to one or the other site.

They got a clear answer: SpoIIIE is assembled only on the mother cell side of the septum (as pre­dicted by Model B). Thus it seems to push the DNA rather than pull it across. 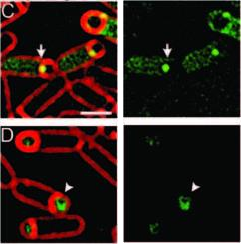 But there is another side to the story. If DNA transloca­tion is impaired, the protein localizes at both sides of the septum, which suggests that the translocated DNA has a say in the matter (model A). In further experiments, they confirmed the participation of the DNA by showing that the orientation of the chromosome also counts. Specific motifs on the DNA permit SpoIIIE to winch it in one di­rect­ion only.

This work is an elegant mixture of clever genetic manipu­lation and mouth-watering fluorescence microscopy. In sum, their results confirm the notion that properties of both the SpoIIIE assembly and the DNA participate in proper translocation. Moving DNA around a sporulating cell is not a game for beginners. It takes molecular so­phistication to do it right.