Many a live wire would be a dead one except for his connections.
Wilson Mizner, Playwright 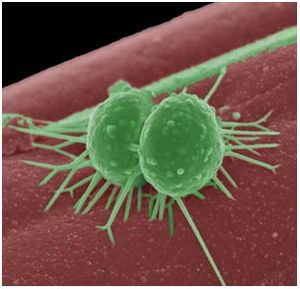 Imagine that there is an alien – on some distant planet – who can reach out with a living appendage of its own and use byproducts of its own metabolism to transfer an electric current outside of its own body. If you think that is bizarre, look no further than our planet – and think small. Metal-reducing bacteria do exactly that. If a little convincing was necessary to think that bacteria are the most exciting and versatile creatures in this world, then their ability to produce an electric current might just do it.

Electricity-producing bacteria ("electricigens") have the remarkable ability to establish direct connections with an insoluble extracellular electron acceptor (minerals) via bacterial nanowires. When we speak of nanowire, what is most likely to be in people’s mind is the lab-made carbon nanowire. Now we have natural nanowires made by bacteria, thanks to several recent studies. Just what are bacterial nanowires? They are pili, protein appendages that extend from the cells. Until this new and unusual role was revealed, bacterial pili were something you learned about in your Microbiology course or gleaned from a friend’s text–book. They were said to be involved in conjugation, attachment, and motility, but who would have thought they could possibly be capable of conductivity? Pili can also facilitate long-range electron transfer across thick biofilm layers, such as are formed on electrodes. In one of the electricigens studied, Shewanella oneidensis, the pili are about 10 nm in diameter, forming bundles as wide as 150 nm that can grow to hundred of microns in length. 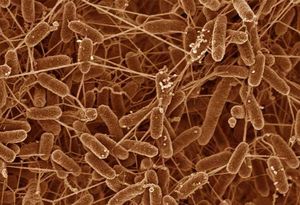 Electrically conductive nanowires extend many times the length of the bacterium Shewanella oneidensis. Photo by R. Bencheikh and B. Arey, courtesy of 'New Scientist'

But it still came as a surprise when, in 2005, members of Derek Lovley’s lab discovered that the pili of Geobacter sulfurre­ducens are electrically conductive. G. sulfurre­ducens produces pili only during growth on Fe (III) oxide, not on soluble Fe (III), and loses the ability to grow on insoluble ferric oxide when its pilin domain proteins are knocked out.

Since their original discovery, nanowires have been discovered in many other bacteria, and in some that do not reduce metals, such as oxygenic photosynthetic cyanobacterium with carbon dioxide limitation, and a thermophilic fermenting bacterium. This is how re­markable bacteria are: they are capable of respiring aerobically and anaerobically using a variety of compounds, including metals, as terminal electron acceptors.

And now we can even see how these organisms associate with their environment, including metal oxides, to carry out the necessary electron transfer. Nanowire pili are essential in biofilm forma­tion and are also required for cell aggregation. This is an interesting idea because forming com­munities and accumulating a high enough cell density allows for higher rates of electron transfer. Allowing for such an extensive network of microbial nanowires even allows for electrical transfer across long distances. "Imagine packing a room full of people," Dr. Yuri Gorby told our class, "then eliminating all of the oxygen in it, so that no one except the one person standing in the doorway could breath outside air. If these people in the room were like some bacteria, just by extending their arms out to touch a neighbor so that everyone in the room would have a physical connection to one another, theoretically, no one would suffocate as long as the one person at the doorway could breath."

Researchers have harnessed probe atomic force microscopy and its sister method, scanning tunneling microscopy, to measure electrical currents on the 10 nA (nano Amps) scale. The sample is spread over a perfectly flat graphite surface and a small conductive probe scans the surface. When the probe reaches an elevated section, such as a pilus, it scans that section for electric activity, thus measuring both the height and conductivity of the object it encounters. A computer then simulates an image of the surface from the probe's measurements. This image can be superimposed with the electrical measurements, allowing us to “see” electrically conductive pili.

Electron-conducting nanowires are hot topics in microbial science, bringing together the fields of physics, chemistry, and microbiology to explain the phenomenon of electron transfer through bacterial cell-surface pili. But how do these cells “send” their electrons through these wires? Much of the mechanism of electron flow remains to be elucidated; however, it is now suggested that the c-type cytochromes, key molecules in the electron transport chain, are responsible for transferring their electron to the pili; indeed, mutants lacking these components were only poor conductors.

With the need for alternative energy sources becoming increasingly apparent, it should come as no surprise that possible microbe-based solutions have garnered their fair share of attention. Microbial fuel cells are an emerging technology that will likely make its first appearances in remote (inconvenient to maintain), low-power applications such as environmental sensors or small-scale water treatment devices. Whenever human beings believe that we have invented something new, it’s just a matter of time before we discover that Nature and evolution have already invented it. Spiders weave, ants build highways, and now it seems that bacteria have managed to network themselves better than Microsoft.

In the words of one of us: "The bacterial world is not done surprising us. That is probably why I chose microbiology to be my field of study..."

By thanks for all studies which focus on this novel case,as a chemist I want to suggest that we can try to use high concertration of high conductive elements for inducing high conductivity in bacterial environments.
Who knows, maybe in this artificial environment we find the best material for our needs to electrone transfer.