Joshua Lederberg and the "Cellularity" of Bacteria 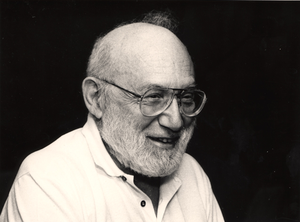 Joshua Lederberg died recently. His is a revered name among our older readers, and we assume that many younger ones also know of him. But just in case, let us mention some of what made him a giant in modern biology. He is best known for finding that bacteria have sex, that is that they can undergo cell-to-cell conjugation. He then discovered (with Norton Zinder, a graduate student) that genes can also be exchanged via phages: transduction. Thus Lederberg discovered two of the three major mechanisms for gene transfer in bacteria. The third, transformation by naked DNA, had already been discovered, or else – who knows? – he might have found that one, too. He then entered the fray related to the origin of mutations. For this purpose, he invented, together with his wife Esther, the replica plating technique, which allowed him to demonstrate that mutations were spontaneous and random, not induced by something in the environment. He did this by comparing a mutant colony identified on a replica plate with the corresponding colony on the master plate, and showing that they both had the same properties. That ended the argument, at least for the time.

These accomplishments place Lederberg among the great biologists of all times. However, Leder­berg did much more.

After becoming one of the youngest nobelists in history, he went on to dedicate himself to matters such as exobiology (a term he coined), public policy about infectious diseases, and bioterrorism.

Let me expand on why his contribution transcends the phenomena he discovered. By the mid- 1940’s, it was becoming evident that bacteria were cells. But were they cells like all other cells, or were they something different? Many biologists were still reluctant to admit bacteria into the realm of "regular" cellular beings. Lederberg believed that sorting this out was of central impor­tance. This is revealed by the interest he took in bacterial cytology, including his finding that penicillin induces the formation of spheroplasts. But it was his discovery that bacteria could mate that swept away the remaining hesitancies. Suddenly, the door was opened for bacteria to take their place as cells like all others – no longer some biological oddity. Lederberg's discovery was most decisive in bringing about this new awareness.

I would also like to share with you this response received from Robert Murray, one of the founders of bacterial cytology.

You are right in saying that Lederberg really had in mind that bacteria were real cells. I know this because both C. F. Robinow and I spent time with him before and while he was at Wisconsin; he was very much interested in the cellularness of bac­teria. I am pretty sure that a good part of the stimulus came, as it did for me, from reading Rene Dubos' book, The Bacterial Cell, and thinking about the micrographs in the addendum in that book by Robinow. Lederberg implies that indebtedness in the foreword he wrote for a compendium of classic papers, Microbiology: a Cent­enary Perspective, (unfortunately not all I would have put in) edited by Joklik et al. and put out by ASM Press in 1999. Look at his second page where he states:"A ma­jor conceptual turning point was the publication of Rene Dubos' The Bacterial Cell in 1945 just in the midst of the wave of discovery of spontaneous mutation, of ge­netic transformation, of (conjugal) ge­netic recombination – i.e., sex – in bacteria, and soon after virus-mediated transduction." My, that was discovery plus some­thing special that came to a mind prepared to think hard about experiments that told one something. I suppose one could add the influence of Cold Spring Harbor and a few other good minds of the time. Nobody seems to really remember Beadle and Tatum, who got Josh on his way.

Lederberg did something for plasmids, too, and I remember him setting me straight on bacteriocins. He mattered to me. I talked to the graduate students this morning about him as the preliminary to a weekly seminar – so also thank you for stimulating that bit of teaching. The three virologists (organizers of the event and the speaker) had not heard of Lederberg. So your blog is worthwhile. The students wanted a date or two as a way of organizing their historical thoughts. I asked the class who had "already discovered" transformation by naked DNA and nobody, including faculty present, could answer! The years 1945 to 1953 put a lot of the basis of modern biology into focus.

I had missed Josh's obit in the NY Times--thanks for posting your comments.

I was actually a post-doc with AT Ganesan in the Genetics dept at Stanford (1967-9!!!) when Josh was chair. Since "Gan" had been Josh's student, I guess Josh was my "scientific grandfather". He was a larger than life character--according to Gan, he filled the room physically, as well as intellectually--as earlier he was quite large--there were stories about collapsed chairs!! The genetics Dept which Josh built was very diverse--ranging from classical bacterial genetics (us) to neurobiology, mammalian cell genetics and exobiology. Josh was writing columns on science for the Washington Post--and wrote about genetic engineering, which I thought then was truly "out there." He was quite the visionary in many respects. He was always cordial and genial to the students (who never wanted to leave) and post-docs. It was a time of great political and social and scientific ferment--and what better place to be than in the midst of it!!