« Gleanings Genome Synthesized by Scientists. So What? | Main | Talmudic Question #28 »

Why Do Bacteria Filament? 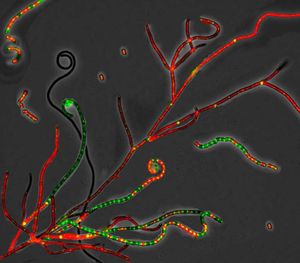 Some bacteria naturally grow as filaments, for example, members of the actinomycetes. Many others, like, E. coli and B. subtilis, make filaments only when under stress – a fact that has been known for about one hundred years but is still a bit of a mystery. Many kinds of stress can prompt this response, including DNA damage that elicits the SOS response, partial inhibition of cell wall synthesis by antibiotics, and the expression of certain thermosensi­ti­ve mutations affecting cell division (called fts mutants for "filament forming temperature sensitive".) So general is this phenomenon that, over 30 years ago, we com­ment­ed in a review: "…it seems possible that any che­mi­cal at some concentration, whether attainable in the la­boratory or not, can cause filament formation." (When the great geneticist, Rollin Hotchkiss, heard of this, he muttered: How depressing! ) Be that as it may, filamentation is to bacteria what fever is to children. 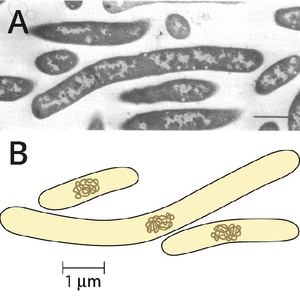 A Ultrathin section of an E. coli tem­pe­rature-sensitive mutant grown at 42°C for 45 minutes. Scale bar: 1 mm. Source. B Schematic drawing of a mutant de­fective in decatenation of progeny chro­mosomes. The DNA does not segregate but remains as a mass in the center of the cell. Source: Schaechter M, Ingraham JL, and Neidhardt FC (2006). Microbe, p.182

Filaments, in both bacteria and fungi, result when rod-shaped cells cease to divide but continue to grow. In many cases, growth can continue for quite a while and at a rapid speed, resulting in long and often healthy-looking filaments. Nucleoids continue to segregate and are spaced normally along the filament. (Some folks like to call this polyploidy, but multinucleate seems more ap­propriate.) Apparently, under some circumstances, cell division is a dispensable process – at least for a while.

To show how indifferent cell growth can be to whether a cell divides or not, cells also become filamentous when decatenation of their intertwined progeny chromosomes is inhibited by mutation or by drugs. Given the pleiotrop­ic nature of the response, it has proven difficult to figure out why cell division is so much more delicate than the rest of the cell's functions.

For now, let's leave questions of mechanism aside and ask instead, how this phenomenon matters in the eco­logy of these organisms. This question has recently been examined in an article from Scott Hult­gren's lab. The article goes a long way towards making sense of why bacteria might have devel­oped such a strategy. It is pleasurable reading, illustrated with many exciting instances. Their examples suggest that filamentation can confer protection against grazing predators (including phagocytes in mammalian hosts), resistance to intracellular killing, swarming motility to evade immune cells, and insensitivity to some antibiotics and other inimical agents.

Making filaments to avoid grazing by predatory protists is often seen in marine and other environ­ments. In general, bacteria longer than 7 μm are inedible by many protists, and filamentation oc­curs in direct response to effectors produced by the predators. In other cases, for example in some Proteus, filamentation is part of their life cycle. These organisms "swarm" intermittently on agar as well as on the surface of catheters. The pathogenic E. coli that cause urinary tract infect­ions invade the epithelial cells of the bladder, and there they transform into filaments some 50 times the normal length. This strategy enables these filamenting bacteria (and others) to survive engulfment by phagocytic cells. Also, at body temperatures, Legionella make phagocytosis-resist­ant biolfilms composed of filamentous cells. 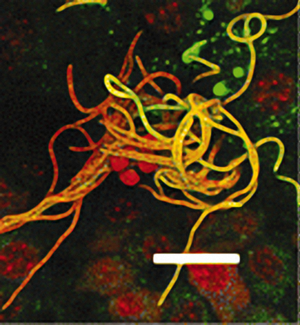 After completing their extensive survey, the authors con­clude that filamentation is a survival tactic employed by diverse bacteria under a variety of conditions. Consider­ing the reliance of some pathogens on filamentation, they suggest that drugs blocking filament formation may be useful against specific pathogens. We thank the au­thors for calling attention to the broad ecological aspects of this distinctive bacterial (and fungal) talent.

I finish with an aside: the opposite of filamentation, that is, division without growth, also occurs. In the lab, bacte­rial cells in stationary phase are generally smaller than growing ones. Likewise, most bacteria making a living in oligotrophic environments are on the small side, some so small as to merit the label nanobacteria. I recall once ob­serving under the microscope the "growth" of E. coli on purified agar containing only phosphate buffer. Each cell divided three or four times, resulting in an average cell size 1/8 to 1/16 of the starting one! Filaments count, but so do numbers.