« Fungal Cuckoo | Main | Everybody Is Always Talking About The Weather… Revisited »

All in the Family – Another Update 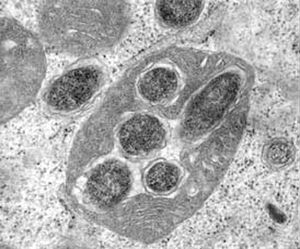 TEM of 'Candidatus Midichloria mito­chondrii' inside a mitochondrion. Court­esy of L. Sacchi, University of Pavia, Italy.

One of the most curious phenomena we have reported here is that of bacteria living inside the mitochondria of a tick. The name given to these bacteria is Midichloria mitochondrii (the genus name alluding to the midi-chlorians in Star Wars). This surprising finding was confined to a single species of hard ticks (Ixodidae). A new report tells us that seven other species of related ticks also display this intriguing endosymbiosis. PCR analysis and some electron microscopy nailed down the presence of the bacteria, all closely related to the original M. mitochondrii and members of the Rickettsiales – those masters of host cell penetration. So, the harboring of a bacterium by an ex-bacterium (the mitochondrion) may be more widespread than previously thought.

In a previous post, we discussed a research report that pointed out how similar the strategy used by these rickettsiae-like bacteria to invade mitochondria is to that of Bdellovibrio preying on free-living bacteria.