BYOG: Bring Your Own Gene

A 17th century illustration of the Coper­nican model of a heliocentric universe. Courtesy of Knowledge 2008

Of necessity, viruses rely on their host cells for both energy and molecular building blocks. Typically, lytic in­fection shuts down the synthesis of host proteins, and the cell's translation machinery is put to work in the service of viral replication. For marine cyanophage, this strategy runs into a troublesome wrinkle.

Let's first digress for a moment and look at the problem faced by all photosynthesizers, cyanobacteria included. Capturing sunlight for cellular work is a risky business. Both UV and visible light can damage the proteins that make up the core of the cell's photosystems. Too much sunlight, and photosynthesis doesn't just level off, it slows down – a phenomenon dubbed photoinhibition. Photoinhibition results when the cell's mechanisms for photosystem repair can't keep up with the damage caused by excess light energy. In cyanobacteria, photosystem II – which catalyzes the light-dependent production of oxygen from water – is particularly vulnerable. At its core sits a dimer of two related proteins, D1 and D2. To keep up with the light-induced damage, D1 turns over very rapidly, and D2 more slowly. De novo synthesis of D1 is required for sustained photo­synthesis. 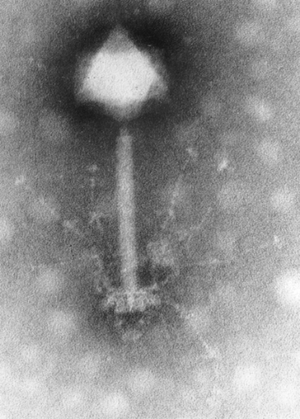 Bring a gene for D1 along – that’s the answer! In a broad survey of the cyanophages, Chisholm and colleagues found that 88% of them carry a gene for D1. It is thought that the phages acquired this gene from their hosts on at least four separate occasions. These genes are not ac­ci­dental baggage, as they are transcribed during infection. About half of the surveyed cyanophages also carry a gene for D2, the other protein in the dimer. This gene could be investigated further and was found to be tran­scribed, as well as translated. Apparently, a D2 gene is not needed by all cyanophage, but is useful for some. Since D1 and D2 must associate to form a functional di­mer, a phage that carries a matched pair would avoid possible incompatibility with the D2 protein of the host. With this in mind, it is not surprising that cyanophage that carry genes for both D1 and D2 infect a broader range of hosts. Phages are great transporters of bacterial genes, but seldom, to our knowledge, have phage taken on board essential metabolic genes from their hosts and employed them for their own purposes.

If photosynthesis is needed for a successful infection, what do these phages do at night? Here's the beginning of an answer. Light is required for adsorption of at least one Synechococcus phage strain. Infective virions present at night simply must wait around until dawn. A burst of light-indu­ced adsorption after dawn leads to release of progeny virions around dusk, which is not a bad thing to do on several counts. For one, viral replication would benefit from the hours of maximum photosynthesis. For another, being inside a host during the day affords protection from sunlight-in­du­ced inactivation, a major cause of phage mortality in surface waters. Lastly, being extracellular at night gets one out of the way of the nocturnal predators that graze on cyanobacteria. Pretty smart.

For cyanophages as well as their cyanobacterial hosts, it is truly a heliocentric world.

WOW!!! See, this is what constantly amazes me as I learn about cells in my biology courses. These cells are able to provide for themselves! I find it so ingenious that cyanophages somehow "learned" to carry a D1 gene with them. It is such a simple solution, and makes perfect sense! I almost feel as if each cell has some sort of "vital force" guiding it; it all seems so coincidental that in evolving, all the right genes, proteins, and structures have evolved. Have you ever seen a video of how a Paramecium moves? Have you seen one where it bumps into algae, tries to get into a little nook, and somehow knows it can't go through and thus "back pedals" with its cilia to go the other way? How does it know to do that? How does it figure out that it can't go through the nook? Why doesn't it keep trying to force itself through until it causes so much internal pressure from the constricting cytoplasm that it explodes? I know it can't be thinking - it has no brain! And yet, the Paramecium moves and interacts with its algae, just as any exploring animal with a brain would.

And yet, what I find saddening, is that any professor I ask has no clue, no guess of what the answer to my in-depth questions could be. I swear - I must be really good at thinking up Talmudic Questions.

So, my point in this awfully long digression is that articles, bits of information like this that I learn make me sit in awe of the "Small Things" all around us, those small things that make life tick. Eliminate one species of the small things, and I'm sure, some sort of ecological catastrophy will manifest itself at some point. Each species seems to have its own unique purpose, and it amazes me how, while never perfect, life semms to just run like a very in-tune machine (biologically and in the very, very big scheme of things!).

Note: Thanks, Merry, for the awesome summary! It was very readable, and sooo fascinating!