« All in the Family Another Update | Main | Plentisillin and Penicillin: An Antibiotic Spoof and a Tragedy »

Everybody Is Always Talking About The Weather… Revisited 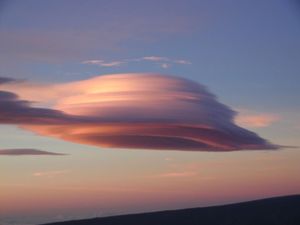 A recent paper in Science adds evidence to the notion that ice nuclei, the particles that lead to the formation of rain and snow, are mainly of biological origin. In fact, lots of the ice nuclei contain bacteria that have wafted aloft. The researchers found that fresh snow in various parts of the world, including Antarctica, contains DNA in particles that are sensitive to both lysozyme and heat. We expect that metagenomics of such samples will follow.

Where do these bacteria that fly through the air with the greatest of ease come from?

The best guess is that they are lifted from the leaves of plants. They may well include Pseudomo­nas syringae, the organism with the reputation for causing ice formation on plants at relatively high temperatures. This new work is part of a small but tenacious literature on the subject of bacterial participation in atmospheric phenomena. For an evolutionary viewpoint, see John Den­nehy’s blog; for a description of the challenges of living in the clouds, complete with pertinent references, see a blog sponsored by The New York Times. (Not that we suffer from comment-envy, but we couldn't help but notice that the latter got 129 comments!)

We have long known that bacteria contribute to the climate of this planet (that is, to long range atmospheric changes). There have been good reasons to think that bacteria might also influence the weather (i.e., what the forecasters tell you about today and the rest of the week). With these recent data, such claims become even more credible.

Sequence diversity of 16S rRNA is a fine criterion; but if Martian diversity stopped diversifying one or two billion years ago when the planet got too cold, measurement of diversity gets a little tricky.

Anyway, we got some folks interested. What a great blog!