« Talmudic Question #29 | Main | All in the Family Another Update » 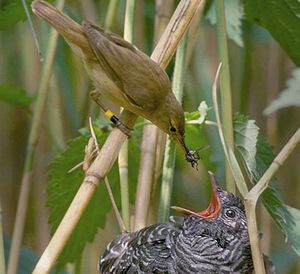 A Common Cuckoo being raised by a Reed Warbler. Source.

Cuckoo birds have an unsavory reputation for laying their eggs in somebody else's nest. There the eggs are tended with care by duped surrogate parents. When hatched, the young cuckoos unceremoniously push their nest­mates over the edge and, in a case of consummate avian chutzpah, open their maw to make their "hosts" feed them as if they were their own. By the time they are fledglings, the young cuckoos may be considerably larger than their foster parents.

Nu, you ask, why this feathery preamble? The reason is that this brood parasitism, as the phenomenon is called, has its counterpart in the fungal world.

Here, the hosts are termites, the mimics, fungi that make balls resembling termite eggs. However, us microbe-lovers can breathe a sigh of relief because, unlike those nasty cuckoos, the fungal balls rarely kill termite eggs. In fact, the association may be beneficial. In the laboratory at least, the fungal balls enhance termite egg survival. Do they make a useful antibiotic? Not known yet. 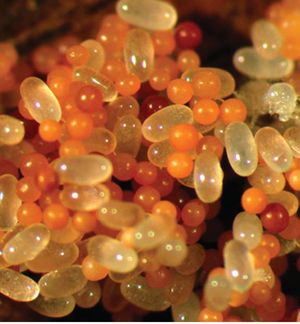 Termite eggs and termite balls. A pile of eggs in the nest of Reticulitermes vir­ginicus. Termite eggs are transparent and oval, whereas termite balls (egg-mi­micking fungal sclerotia) are brown and spherical. Source.

The fungal balls are sclerotia, hard concretions of fungal hyphae which, in this case, are similar in appearance to termite eggs. This phenomenon was discovered by Kenji Matsuura and colleagues in 2000. Their recent paper reveals that the termites are no smarter than cuckoo birds in that they can't distinguish a phony egg – as long as it is similar in diameter and is coated with chemicals from the termites. Even coated glass beads of the right size are tended by the termites. Texture, however, does matter. Both these fungal balls and real eggs have a very smooth surface; the rough-textured sclerotia of related fungi don't fool the termites. The fungus in question is a basidiomycete, Fibularhizoctonia sp. nov. Its beautiful round shiny sclerotia are formed spontaneously, not in response to a signal from the termites. Thus, they can be found when growing the fungus in the lab on agar plates.

Now comes a surprise. Matsuura and colleagues asked what might be on the eggs that makes termites recognize and tend them. As it turns out, it is nothing other than lysozyme! The authors identified this protein in adult termites, as well as their eggs. They developed a simple lysozyme assay by coating glass beads with a sample and then asking the termites to determine if the bead qualified as an egg. Even chicken egg-white lysozyme does the trick. This protein is made by the termite eggs and more is added to the surface by the worker termites whose frequent egg-grooming coats the surface with lysozyme-containing saliva. One presumes that fungal balls, when present, are also painted with lysozyme, given that they are groomed along with the eggs. For a movie showing termites busily grooming, click here.

Not only is this an example of an unexpected biochemical parsimony – using one protein as both an antibacterial compound and as an insect pheromone ­ but, in the words of the authors: "This is the first identification of proteinaceous pheromone in social insects…… [This] represents a major step forward in, and results in the broadening of, the search for recognition pheromones. This novel function of lysozyme as a termite pheromone illuminates the profound influence of pathogenic microbes on the evolution of social behaviour in termites."

Egg-mimicking fungal sclerotia! What an interesting observation and analysis. I enjoyed your comparison of this fungal strategy with the behavior of cuckoos.