Plentisillin and Penicillin: An Antibiotic Spoof and a Tragedy

The year 1946 was one in which it was possible for many of the world’s peoples to have a hopeful view for the future. The horrors of World War II were over and rebuilding was in progress. Inter­national travel resumed and, as fleets of airplanes were constructed, became somewhat easier than previously. A new world-wide organization, The United Nations, had been established and the General Assembly and Security Council held their first meetings in January of that year. In scientific disciplines, new technologies stemming from the war-time investigations of the release of atomic energy, were transforming research. The analytical work that would eventually lead to the double helix structure for DNA and the very extensive use of biotechnology was underway. 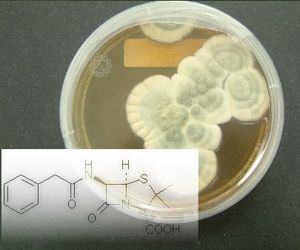 In medicine, a major development was the antibiotic re­volution leading to the control of many, previously in­tractable, infectious diseases. Significant amounts of penicillin for civilian use became available in the USA in 1945 and the UK in 1946 (Bud, 2007). Indeed, penicillin can now be considered as a commodity chemical (Bent­ley and Bennett, 2008). An organization for the relief of war-devastated countries, The United Nations Relief and Rehabilitation Agency (UNRRA), had been established and, beginning in 1946, provided antibiotic expertise and even entire penicillin production plants to several nations (Bud, 2007). Slowly, antibiotic use became a world-wide phenomenon and the term, antibiotic, came into the common vocabulary.

An antibiotic was seen as a miraculous drug that was a more or less general cure-all, prescribed even to treat the common cold. Moreover, following a massive and secret research program in the USA and the UK, the chemical structure of penicillin had been determined and became generally known in 1946.

An indication of the widespread publicity for antibiotics was a preprint distributed at the AAAS Meeting, March 27−30, 1946, with a typical cover of the kind used for Science. This report an­nounced the discovery and characterization of plentisillin – a material isolated from banana peel with the unique property of having no antibiotic activity whatsoever. Remarkably, it contained deuterium, 2H, in addition to the usual elements, C, H, N, O and S. It was, of course, an elaborate spoof, with the Science volume number being given as ℑ. The author used a pseudonym, Norman Nadir, the latter an anagram for Radin, at that time a graduate student at Columbia University’s College of Physicians and Surgeons. Happily, Radin went on to have a successful career as a bio­chemist with many serious publications. The parody has been reprinted (Weber, 1987).

Radin’s post-war parody was intended as a joke. A half-century later it is no joke at all that several antibiotics have lost or are losing their effectiveness.

Like plentisillin, they essentially have become materials lacking antibiotic activity. After some 6 decades of the very intensive use of antibiotics, many infections have been cured, many lives have been saved. Beginning in the 1950s, some organisms that previously were easily controlled by antibiotics acquired resistance to these materials. Early hopes that the resistance phenomenon could be controlled by the development of new, synthetic or semi-synthetic, antibiotics or by iso­lation of newly discovered compounds, have been fulfilled only partially. Now, at the beginning of the 21st century, resistance to antibiotics is, indeed, a serious problem.

A dramatic example is the treatment of infections due to Neisseria gonorrhoeae, about 800,00 of which occur each year in the USA alone (Wang et al., 2007). Beginning in 1936, uncomplicated gonorrhea could be controlled with sulfonamides, but by 1945 one third of strains were resistant. Penicillin came to the rescue. A dose of 50,000 units initially provided a one-day cure but in 1972 it was necessary to use a much larger amount of penicillin, 4.8 × 106 units. As the inevitable resis­tance spread, both penicillin and tetracyclines were abandoned in the 1980s as gonorrhea thera­pies in the USA (Wang et al., 2007). The replacement therapies were cephalosporins and fluoro­quinolones. However, fluoroquinolone-resistant strains have spread world wide (Tapsall, 2001) and a special Gonococcal Isolate Surveillance Project (GISP) was funded by the Centers for Disease Control and Prevention to monitor USA trends in fluoroquinolone resistance (Wang et al., 2007). It goes without saying that resistance increased with increased use of the fluoroquinolones. An interesting finding was that after penicillin treatment was discontinued, prevalence of penicillin resistant strains has declined.

Initially, gonococci were very susceptible to oral ciprofloxacin with MIC (minimum inhibitory val­ues) about 0.06 mg·L-1. These values increased, first to 1 mg·L-1 and later became as high as 16–32 mg·L-1 (Tapsall, 2001). In a recent Morbidity and Mortality Weekly Report (April 13, 2007) came grim news: CDC announced that fluoroquinolones were no longer recommended for treatment of gonococcal infections. Now the only recommended treatment is the use of cephalosporins. Un­fortunately, these antibiotics are expensive and often require injection (Wang et al., 2007).

Another problem concerns a semi-synthetic penicillin, methicillin. This antibiotic resembles the common penicillin G (benzylpenicillin) but the phenyl group has been replaced with a dimethoxy­phenyl group – hence the ‘meth’ component of the name. It was developed by the Beecham com­pany; the process from discovery to launch (1960) was remarkable, requiring only a few months (Bud, 2007). However, within a year, a methicillin-resistant Staphylococcus aureus strain was discovered at Queen Mary’s, a large children’s hospital near London. This organism, with the acronym, MRSA (Methicillin-Resistant Staphylococcus Aureus) became increasingly common in hospitals. These Gram-positive bacteria have acquired levels of resistance that transform a pre­viously easily treatable illness into a potentially lethal septicemia. In hospital settings, transplant patients and the elderly are most at risk. Moreover, problems with MRSA have spread to the ge­neral community leading to the term, Community Acquired MRSA (CA-MRSA).

A Washington Post article (October 17, 2007) notes that MRSA is now more deadly than the AIDS virus; the headline reads: Drug-Resistant Staph Germ’s Toll Is Higher Than Thought. The article cites 94,000 serious infections and nearly 19,000 deaths each year. The article was occasioned by the death of a 17 year-old football player, with the necessary closing of 21 schools in Bedford County, VA, for cleaning in the hope of preventing other cases. That the victim was a football player is notable since CA-MRSA often involves athletes, prison inmates and children.

Organisms resistant to other, potent antibiotics increasingly have been identified. Indeed, the so-called “antibiotic of last resort”, vancomycin, is now vulnerable. It is indeed ironic that the name, vancomycin, was derived from words related to “vanquished” (e.g., French, vaincre, to conquer). Prescription practices drive the evolution of drug resistance. The more antibiotics are used the greater the Darwinian selection pressure on strains with ever higher levels of resistance. A com­plete description of the problem of antibiotic resistance is beyond the scope of this essay. How­ever, two recent books with very telling titles, are mines of information. They are Revenge of the Microbes: How Bacterial Resistance is Undermining the Antibiotic Revolution (Salyers and Whitt, 2005) and Penicillin: Triumph and Tragedy (Bud, 2007). They should be required reading for anyone interested in the treatment of infectious disease.

Bentley, R., and Bennett, J. W. 2008. A ferment of fermentations: reflections on the production of commodity chemicals by microorganisms. Adv. Appl. Microbiol., 63, in press.

Salyers, A. A., and Whitt, D. D. 2005. Revenge of the Microbes: How Bacterial Resistance is Undermining the Antibiotic Revolution. ASM Press, Washington, DC.

Ronald Bentley is a Professor Emeritus, Department of Biological Sciences, University of Pittsburgh. Joan Bennett is a Professor at the Department of Plant Biology & Pathology, Rutgers University. She is also Associate VP for the Promotion of Women in Science, Engineering and Mathematics, and a Past President of the ASM.

How many diseases have been helped or cured from antibiotics?