The Age of Imaging 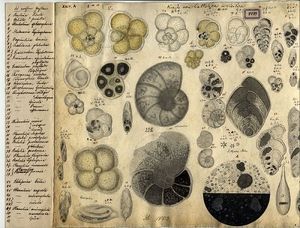 Not so long ago, it would have seemed implausible that biology would return to its origins as a visual science. Some would have considered this a regression to the days when biologists were pretty much confined to studying just what they could see, such as the shapes of organisms and their tissues. Back then, they focused on refining what Pliny had observed with his bare eyes, what Hooke and Leeuwenhoek saw under the microscope. The methodological lines of attack were dramatically redirect­ed from the visual by the revolutionary discoveries of the second half of the last century. Biochemistry, genetics, molecular biology – none of them relied primarily on vi­sualizing the structure of objects. For some time, doing morphology was suspect and, in some quarters, even using a microscope was equated with doing old-fashioned science.

How biology has (once again) changed!

Some of the most fundamental work done now once again involves seeing shapes and forms. Granted, genomics and its -omical kinfolk can be done with one's eyes closed (but with one's mind open). However, if you look no farther, you would miss much of the excitement of the day. Nowa­days, mind-blowing insights come from seeing with your own eyes.

Biological imaging today starts with the very small, at the level of molecules – a field where splen­did advances are being made. A new name, Structural Biology, was awarded to this sort of study. In my graduate student years over half a century ago, only the rare visionary predicted that we would readily "see" how an enzyme works or how macromolecules interact with molecules large and small! These are grand achievements indeed. It gets better: single molecule imaging methods allow us to visualize the tiny movements made and the forces generated by proteins or riboso­mes. One can now "see" in real time polymerases polymerizing and riboso­mes translating.

Moving up a bit in magnitude, microscopy can also claim amazing developments. In my days, it was believed that the optical mi­croscope had reached its physical limits and that the electron mi­croscope had severe limitations. Recent progress on both these fronts continues at a stunning pace. Fluorescence techniques, including methods to clean up their signals, permit us to see single molecules in action at an exceptional degree of resolution, often in living cells. And the signals can even be quantitated. On the horizon are other techniques under development that hold promise for even greater resolution.

Newer on the scene is the coupling of cryotomography with the electron microscope, a technique that permits one to visualize the interior of unfixed whole cells. In a sense, this lets one crawl in­side a relatively untreated cell, take a look around, and see what there is to see. I am reminded of an old prelim exam question that I had used to torment graduate students: If you could get to be small enough to fit inside a bacterium, what would you see? We thought this a "cool" question that paralleled the science fiction movie, Fantastic Voyage, where a submarine with crew is miniatur­ized to 1 μm in length and thus able to travel the bloodstream of its inventor to destroy a blood clot in his brain. How about that! My question is no longer in the realm of science fiction! Although the technique doesn't miniaturize the experimenter, the result is the same: one can pretend to see what’s inside a bacterium. The caveat in this statement is due to several factors: the cells have to be quite thin (although most prokaryotes in nature probably qualify); not all the structural con­stituents can be resolved with the same clarity; and the high voltage electron beam used probably introduces distortions. Still, crawling inside a bacterium is, by any standard, a magnificent achieve­ment. So, what is there to see inside a "simple" bacterium? This will be the topic for a future post­ing.

The Age of Imaging is just beginning. It's hard to predict where it will lead, as the limits seem to constantly recede. Let's go for broke: someday we should be able to enjoy movies that show what goes on inside living cells at the resolution of the electron microscope. Maybe even talkies?

The last podcast from The Naked Scientists starts with a nice discussion about confocal microscopy followed by another segment about lens-less imaging based on how the eye sees floating debris that appears in front of the retina: http://www.thenakedscientists.com . I was not aware that stop-action photography of living systems at one-minute intervals using confocal microscopy was possible.