Feed From the Hand That Bites You 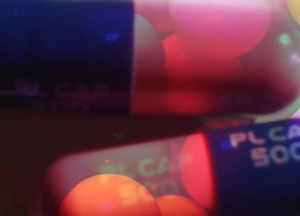 If you look for them, you'll find them – bacteria that can feed on antibiotics, that is. Here, looking means to make an enrichment culture using a medium whose single carbon source is an antibiotic. Add a soil sample with its resident bacteria and look to see who, if anyone, will grow. As reported in a recent issue of Science, research­ers collected soil samples from 11 environments, includ­ing some very unlikely to have had any exposure to hu­man-made antibiotics. They tested each soil sample against 18 antibiotics, some natural and some human-made. There were no zero scores.

Every soil sample had bacteria able to eat at least one antibiotic, and bacteria from at least one soil sample were able to grow on every antibiotic. More than half of these talented organisms belong to the orders Burkholderiales and Pseudomonadales, groups with large (6-10 MB) geno­mes that encode an extensive metabolic repertoire. The majority of the isolates were resistant to the antibiotic used in their enrichment culture and some to others as well. Overall, 11 different orders were represented, so they cannot be relegated to some obscure taxonomic corner.

What to make of this? Obviously, it adds to the repertoire of bacterial biochemical talents. Other than some plastics, there is hardly any organic compound that cannot be chewed up by some bacterium (and we aren’t entirely convinced about the plastics, either – just give them a little more time.) But does this finding matter for our health concerns about increasing antibiotic resistance? The concentration of antibiotics in soils is said to be very low even in soils that have not been treated with antibiotic-containing material, such as cow manure. It may not be so simple as all this because in the heterogeneous environment of soils, the local concentration of an antibiotic may be quite high, especially around the organisms that produce them (actual numbers seem hard to find in the literature, so would be grateful to readers who point them out to us.) But if antibiotics are not present in significant amounts, being able to live off them would not be a pertinent skill.

Is "antibiotophagia" just a microbiological curiosity or does it matter in the evolution of drug re­sistance? Is this one of our Talmudic Questions?