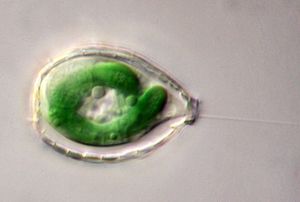 The evidence is quite compelling. All plastids (photosyn­thetic organelles and non-photosynthetic kin) are thought to be descended from one cyanobacterium that was engulfed by one unicellular heterotrophic eukaryote approximately one billion years ago. The descendents of that host are today's green algae (and plants), red algae, and glaucophytes (a group of microscopic freshwater algae). Several other eukaryote lineages acquired plastids second-hand by engulfing a plastid-containing red or green alga (a process called secondary symbiosis to dis­tinguish it from the original primary symbiosis.) For an interesting review of the convoluted history of plastid acquisition, click here.

Granted, it is not a simple matter to transform one's lunch into a well-behaved photosynthetic organelle, but still one wonders why this appears to have happened only once, especially since plastid acquisition by secondary symbiosis – also not a simple thing to do – has occurred several times. Still, for some reason(s), only one eukaryote has managed to transform a cyanobacterium into a photosynthetic cellular entity. Or so it was thought...

...until recently when an obscure freshwater amoeba, Paulinella chromatophora, attracted attent­ion for possibly hosting an unrelated plastid. In other words, it may have acquired its cyanobacte­rium all on its own, which would be big news. It is a phototroph, but its closest relatives are hete­ro­trophs, some of which feed on cyanobacteria.

When P. chromatophora was first described over a hundred years ago, its prominent sausage-shaped photosynthetic entities were named chromatophores – an unfortunate choice because the term has other meanings as well – but it has stuck. Other names are used as well, adding to the confusion. Some call them cyanelles because they have retained their peptidoglycan cell walls and thus look more like the cyanobacteria they once were. Some call them photosynthetic endosym­bionts, while yet others argue that they are organelles deserving of the name plastid.

Names aside, what do we know about them? The complete genome sequence of the Paulinella chromatophore was recently published. It has a single chromosome containing only 1,021,616 bp – a reduction of more than a third compared to the smallest known genome of a cyanobacterium (Prochlorococcus marinus). Of the 39 sequenced cyanobacterial genomes, the one most closely related to the chromotophore genome is that of a Synechococcus. Interestingly, Prochlorococcus and Synechococcus form a monophyletic lineage apart from all other cyanobacteria and all known plastids. Thus it is clear that this chromatophore is no wayward plastid. The genomes of the chro­matophore and Synechococcus WH5701 are remarkably similar. The Synechococcus genome contains orthologs for 855 of the chromatophore's 867 protein-encoding genes, in virtually the identical gene order. Can't get much closer that that.

Are the chromatophores true plastids or mere endosymbionts? This is being hotly debated. Al­though there is no clear line between the two, there are some generally accepted criteria for or­ganelle status: organelle replication is controlled by the host; neither party can survive indepen­dently; organelles have undergone massive genome reduction including horizontal transfer of some genes to the host nuclear genome. And most tellingly, host-translated proteins required by the organelle are directed to the organelle by a dedicated transport system.

So, how do the chromatophores measure up? So far so good (for the organelle fans.) Chromato­phore replication is tied to host cell replication. The host-chromatophore relationship appears to be stable (more than 15 years in laboratory culture) and obligatory. Genome reduction has oc­curred, and the presence of pseudogenes indicates that it may be ongoing. Intriguingly, a few genes thought to be needed for intracellular life appear to be missing, too. Perhaps they now reside in the host nuclear genome, or perhaps their role is filled by metabolites provided by the host. As to the key criteria – transfer of cyanobacterial genes to the host genome and transport of proteins back to the chromatophore – answers must await further experimental results. It is difficult to be patient, as this is exciting news. But given that this symbiosis is estimated to have occurred roughly 60 Mya, I guess we can wait a little longer.