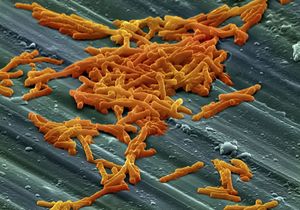 We needn’t be reminded that pathogenic microbiology is a branch of microbial ecology but a nice example helps makes the point. The story is about a nasty disease, pseu­­domembranous colitis, which affects mainly immu­nocompromised people who have been on antibiotics and are lying in a hospital bed. The disease, as the name suggests, is an inflammation of the large intestine ac­companied by the formation of a membrane-like fibrin deposit that lines the surface of the gut. The usual culprit is an anaerobic sporeformer, Clostridium difficile. Most people do not normally harbor C. difficile, although many infants and young adults do so without any problem. When the normal gut biota is reduced by antibiotics, C. difficile grows and produces toxins that are responsible for the pathology. Actually, the typical outcome of this infection is not pseudomembranous colitis, but, more often, diarrhea.

Being a sporeformer, C. difficile is insensitive to common disinfectants and thus can survive on hospital surfaces to become the cause of the next infection. Strong agents are required to kill the spores, e.g., bleach. But what causes the disease to erupt?

Since people who have not received antibiotics don't come down with it, the usual thought is that the abundant normal bacterial biota outcompetes these organisms for the desirable sites and ne­cessary nutrients. This is not an easy thing to sort out. There is, however, at least one factor that helps explain the ecology of this unusual entanglement between some people, their drugs, and these bugs.

As first reported by Wilson in 1983 (in the Journal of Clinical Microbiology) and extended in more detail by Sorg and Sonenshein in a recent issue of the Journal of Bacteriology, bile salts may be a key factor in inducing C. difficile spore germination in the gut. This germination step is critical for infection since the bugs are likely to be transmitted as spores. (Spores are a metabolically dorm­ant form of C. difficile that does not produce toxin; only when spores germinate and grow out as vegetative cells do they express the toxin genes.) The liver produces bile salts for solubilizing fats; their induction of C. difficile spore germination is an unintended and unwanted response. 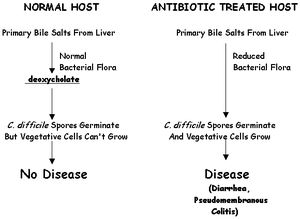 Bile salts are secreted as conjugates of taurine or glycine. The normal gut bacteria metabolize them, converting them into simpler compounds (known as secondary bile salts) such as deoxycholate. These compounds also sti­mulate spore germination, but deoxycholate inhibits the growth of the vegetative cells that arise from them. In other words, bile salts induce C. difficile spore germina­tion, but what happens next depends on the gut biota. When the normal biota is present, deoxycholate is pro­duced, growth of C. difficile is inhibited, and the host is unharmed. Purge the gut of its normal bacteria by an­tibiotic treatment, and the unmodified bile salts induce the spores to germinate without then hindering the resulting vegetative cells. Presto, the person gets sick.

There are two fancy words that apply to pseudomembranous colitis: nosocomial, meaning hos­pital-acquired, and iatrogenic, meaning doctor-induced. This disease probably existed before the antibiotic era, but achieved prominence courtesy of their extensive use. A double edged-sword, antibiotics.

On a personal note, the discovery and elucidation of C. difficile as the cause of pseudomembran­ous colitis was carried out by investigators at Tufts Medical School, J. Bartlett, S. Gorbach, T. Chang, and A. Onderdonk. The Sorg and Sonenshein paper is also from Tufts, which is were I hung out for most of my career.