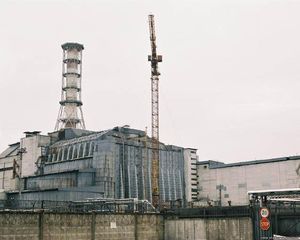 The Chernobyl reactor encased in ce­ment. It is said that it will remain radio­active for some 100,000 years.

One of the most breathtaking reports in this blog has been the finding that ionizing radiation stimulates the growth of some fungi, such as those found in the encased Chernobyl reactor. A recent review in FEMS Microbiology Letters expands on this phenomenon and surveys considerably more data. Here you can read about how fungi accumulate some radionuclides and resist powerful jolts of ionizing radiation. You can also learn about their amazing ability to grow their hyphae towards the radiation source and flourish better as the result. In toto, this is an example of the stunning ability of living things to hack it in even the most atrocious of environments. But the point is not just academic. The authors say: Using this recently acquired knowledge, we may be in a better position to suggest the use of fungi in bioremediation of radioactively contami­nated sites and cleanup of industrial effluent.

I also dedicated a comment on this subject in my blog. (http://curiosidadesdelamicrobiologia.blogspot.com/).Talking about bioremediation in radioactively contaminated sites I also remember a paper dealing with the introduction of toluene degradation genes in the chromosome of Deinococcus radiodurans. So it seems that is possible to create a kind of "bug pack" to deal with radioactive industrial effluent.