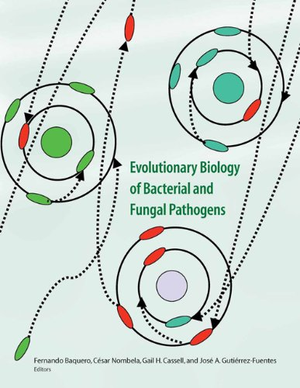 Three Spanish microbiologists (F. Baquero, C. Nombela, and J. A. Gutierrez-Fuentes) plus one American (G. Cas­sell) edited Evolutionary Biology of Bacterial and Fungal Pathogens (ASM Press, 2007). We needn’t contribute a review of our own because a particularly informative one (there on the last three pages) by Ricardo Guerrero ap­peared in a recent issue of International Microbiology. This book is most timely because we are becoming in­crea­singly aware that pathogenic microbio­logy is a branch of ecology. As Julian Davies notes in the Fore­word: All microbiology is environmental microbiology and has been for billions of years. This book emphasizes that to successfully ward off pathogens requires an un­derstanding of the evolution and ecology of the inter­acting partners. How else can we interpret the emer­gence of new pathogens and the re-emergence of others?

A major goal of Evolutionary Biology of Bacterial and Fungal Pathogens as a whole is to convey the idea that bacteria undertake similar forms of microbial variation in different habitats. The main distinction is that the habitat of a “natural” microorganism is the abiotic environment, while that of a pathogen is another living organism — the (human) host…Microbial infections of humans are a relatively recent interaction, whereas the genetic and biochemical functions necessary for invasion and infection of the “modern host” probably evolved in an ancient environment from cell-to-cell interactions between microbes and protists or small invertebrates. As such, bacterial virulence factors have not evolved merely to cause disease in humans; rather, they are part of a general mechanism to coexist with, to cover, or to penetrate eukaryotic cells.