Gulliver and the Lilliputians 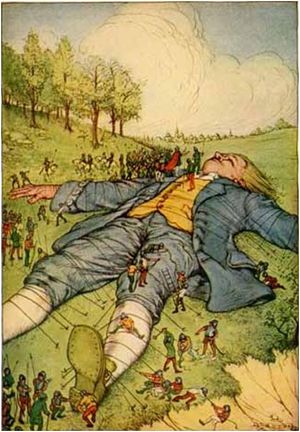 "I found my arms and legs were strongly fastened on each side to the ground." Gul­liver's Travels, as illustrated by Milo Win­ter.

Two archaea walk into a bar and the bartender says… No, we don't have an ending for this joke (tell us if you do!), but if the temperature of the bar were around 90°C and the locality a hydrothermal vent off Iceland, there is a chance that the pair sauntering in could be one of the most interesting duos around. One partner is Ignococcus hospitalis, an archaeon of respectable dimensions (2μm diameter) that is often seen in close association with the much smaller Nanoarchaeon equitans.

To start with, the names of the organisms were chosen with care. Ignococcus means "fiery coccus;" hospitalis, "host;" equitans, "horse rider." So, what about them?

I. hospitalis is an anaerobic chemolithotroph that gets its energy from oxidizing elemental sulfur using molecular hy­drogen as the electron donor. N. equitans is tiny – ap­proximately 400 nm in diameter – and has one of the smallest known genomes, some 490 kb. It lacks nearly all genes for lipid, cofactor, amino acid, and nucleotide bio­synthesis. Not surprisingly, it can't be grown alone in the lab. It obtains its membrane lipids from its partner, and likely its amino acids, as well. For more intimate details, see a new report in the Journal of Bacteriology that describes an interesting collection of physiological and structural studies.

One would expect such a drain of resources to have some negative impact on the host cells, but in the lab I. hospitalis grows just as well with or without its partner. Its doubling time is not reduced, and neither is the final cell density. However, something is going on. During exponential growth in co-cultures, about a third of the Ignococcus cells are seen to carry 2–3 N. equitans cells. When en­tering the stationary phase, most Ignococcus cells are covered with as many as ten N. equitans, reminding us of Gulliver outnumbered and overrun by Lilliputians. On the other hand, N. equitans does not proliferate until the host en­ters stationary phase. Who's inhibiting whom? This sounds complicated. The authors suggest:"…that the association of I. hospitalis and N. equitans repre­sents a highly specialized system. Consequently, assignment to the classical category of symbiosis, commensalism, or parasitism might not be possible even in the future." 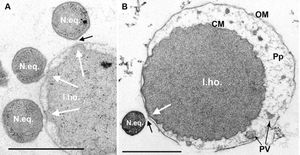 But N. equitans has other unique traits that are both ex­traordinary and intriguing. Phylogenetically, it is a thing onto itself. For starters, it is the only characterized mem­ber of the kingdom Nanoarchaeota, a group thought to represent a very ancient branch of the tree of life, maybe going all the way back to the beginning (the precise branching point being still under debate.) Its diminutive genome possesses unique and potentially ancient an­cestral traits. Five of its tRNAs are encoded by genes that are split along the genome. The RNAs are later spliced together. Nowhere else does one find this way of making tRNAs. In all cases, the split occurs at a site adjacent to the anticodon – the normal location for tRNA introns. One is prompted to wonder about the why and the how of this trans splicing mechanism, as well as to speculate about the evolutionary origins of tRNAs. (For the latest, click here.) There are numerous protein-encoding genes that are split, too. And unlike other Archaea, this organism lacks operons. Not that it lacks the genes, but instead of being clustered, they are scattered about the genome.

Another distinguishing feature is that N. equitans is arguably the best, although perhaps not the only, example of a parasitic archaeon. Why the Archaea have not exhibited greater gusto for a parasitic lifestyle is an open question.

Hi I am studying in high school and read many stories of gulliver in the textbooks. i have always a fantasy to travel to lilliput. And I still wonder if we can find out such place anywhere on the earth. What is ur suggestion about the reality behind this fact .i have also seen photo of very little woman on http://fundoosh.in there they claimed that she is the smallest woman in the world. is it true. is it possible having such a small human being plz reply.

Hi Nora,
I'm sorry to say that we are of no help. Our use of Gulliver and the Lilliputians was metaphoric, as we were talking about bacteria. Good luck to you.