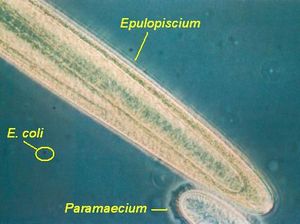 Alan Cann’s MicrobiologyBytes *) has a great video show­ing magnetotactic bacteria darting back and forth in re­sponse to a moving magnetic field.

Besides a lot of other interesting news, Tara Smith’s Aeti­o­logy *) has an update on the case of Robert Farrell, the geneticist who got into trouble for supplying generally harmless bacteria to an artist who used them in an ex­hibition. The good news is that the case was dismissed (although the Feds can still appeal it).

For the aficionados of Epulopiscium, that Gargantua among bacteria, a new article reports that cells of this fish-gut-dwelling organism are polypoid in the extreme. This gives them some of the advantages of a multicellular organism, a point that Cesar Sanchez discusses (along with some highly pertinent links) in his blog Twisted Bacteria (blog inactive since 2012).

In Spanish, Miguel Vicente’s Esos Pequeños Bichitos (Those Small Little Bugs) has a revealing and informative article on Robert Koch and aspects of his private life. Worth polishing up the Spanish you learned in school.

And while you’re brushing up on languages, a blog in French, Le blog des bactéries et de l'évolu­tion deals with the 150th anniversary of the birth of Theodor Escherich, the German physician after whom our best known cellular organism is named (blog inactive since 2010). This occasion was also celebrated in 2007 in Nature Reviews Microbiology.

In Evilutionary Biologist, John Dennehy deals with the perennial question: Are viruses alive? We maintain that this should only be asked after a few beers. As a good geneticist, John answered: Living entities are those that evolve via natural selection, and surely viruses should be included in that category. The argument continues, no? (blog inactive since 2010)

Carl Zimmer’s The Loom*) talks about his soon-to-appear book: Microcosm: E. coli and the New Science of Life. Having read some of it in draft form, I can heartily applaud this birth.