Where Art Thou, O Ribosome? 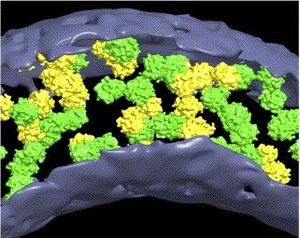 Cryoelectron tomography of a vitrified cell showing ribosomes and the mem­brane (grey) in an optical slice. Ribo­somes determined with high fidelity are green, those with lesser fidelity are yellow. Source.

In a recent post (The Age of Imaging), I mused about ad­vances in microscopy that are revolutionizing our con­cept of bacterial cell structure. High on the list of amazing developments is cryoelectron tomography (CET), a tech­nique that allows one to look inside bacterial cells. Flash-freezing cells at very low temperatures embeds them in vitreous ice, and this preserves their structures when subsequently subjected to the high vacuum of the elec­tron microscope. This process is minimally invasive and requires no staining. Bacteria frozen in this manner can swim away after thawing! A great tutorial about this tech­nique and its uses is provided on Grant Jensen’s web page.

Cryoelectron tomography has its limitations, some of which are discussed by Jensen. Most pertinent to bacterial microscopy is the thickness of the ob­ject viewed. It turns out that bacteria like E. coli are close to the upper limit of what can be con­veniently looked at, at least for now. Most of the articles written so far concern smallish bacteria, such as Bdellovibrio, Caulobacter, Flavobacterium, Spiroplasma, and Prochlorococcus, among others. However, studies on subcellular structures near the cell surface or protruding from it have been reported in larger cells as well. An overview of such studies can be found in a recent review. One can reasonably expect an avalanche of reports of this sort. It’s already happening.

How to choose one example from such a rich offering? I opted for one that deals with a question that I worried about long ago: where are ribosomes located in bacterial cells? Are they mostly at­tached to nascent messenger RNA strands, making proteins even as the mRNA is being tran­scribed? This question was recently approached by CET using the slender mycoplasma, Spiro­plasma melliferum. Although the full answer to my question is not yet available by this technique, the authors showed that most ribosomes seem to be more or less randomly distributed in the cell. About 40% may well be in polyribsomes – those strings-of-pearls made of ribosomes attached to mRNA. (This figure is lower than that seen in fast growing bacteria, where it is about 80%.) About 15% of the ribosomes appear to be lying close to the membrane, with their 50S subunits facing it. This is the orientation one would expect if the proteins being made are in the process of of being inserted in the membrane. (For a report imaging this process, click here.) This process, which links transcription, translation, and insertion of proteins into the membrane, was termed 'transertion' by Woldringh.

One more thing. When it comes to ribosomes, their concentration is highly dependent on the growth rate as imposed by the nutritional conditions. Therefore, parameters such as the pro­portion engaged in translation or transertion should be studied in cells growing at different rates. Some of us have been saying this for a long time.