A Most Personal Note

At the June General Meeting of the ASM in Boston, there was a session called From Bacterial Phy­siology to Cellular Genetics: Reflections on the 50th Anniversary of Schaechter, Maaløe, and Kjeld­gaard. The participants were Fred Neidhardt, Stephen Cooper, Amy Vollmer, and myself.

Fifty years ago, it so happens, I was wrapping up my postdoc in the lab of Ole Maaløe (pronounced something like Moh-lö, "umlaut" on the o) in Copenhagen. It was also at that time that our two pa­pers on growth physiology of Salmonella enterica var. Typhimurium appeared. (For PubMed cita­tions to these papers, click here and here.) So, what is all this current fuss about? Our work and that of others led to the realization that when organisms grow in various media, their size and gross content of cell constituents (proteins, DNA, RNA, lipids, etc.) is directly proportional to their growth rate. The faster they grow, the more of these constituents they have. This holds true as long as the cultures are growing exponentially and thus are at a steady state. Two media differing in composition but supporting the same growth rate give the same measurements. We concluded that a bacterium can exist in any one of a number of physiological states depending on its rate of growth. As an illustration, cells of the same species observed under slow versus fast growing con­ditions can vary in volume by a factor of 10 or more!

This work helped clear up what had been a rather confusing state of affairs regarding bacterial growth. The classical, more-or-less S-shaped growth curve could now be interpreted as an expo­nential phase bracketed by two transitions, first from slow to fast growth and then from fast to slow growth (a shift up and a shift down). Details and further interpretations will soon be available in a review by Cooper recently accepted for publication in BioEssays.

What came of this? 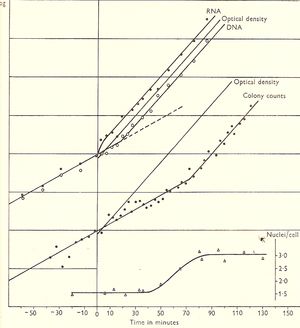 (Click to enlarge) At 0 time, a culture of Salmonella was "shifted-up" from gluco­se-minimal medium to nutrient broth. The graph shows the log of the measure­ments vs. time. Note the abrupt change to a new rate of increase for both total RNA and optical density of the culture (a measure of cell mass), followed shortly by total DNA. This is also reflected in the increase in the number of nucleoids per cell (insert). Meanwhile, the cell count con­tinued at the old rate for ~70 minu­tes, which allowed the cells to increase to the size characteristic of the new me­dium.

In time, many more people showed up at Maaløe's door­step and contributed to the "Copenhagen School of Bac­terial Growth Physiology." One of the interesting con­clu­sions derived from this work was that when bacteria are growing in a steady state, their rates of chain elongation of proteins, RNA, and DNA are roughly the same even when growing at different rates. This implied that the relevant biosynthetic machinery works at top efficiency regardless of the growth rate of the culture. It follows that in order for a bacterium to grow faster and make proteins faster, it must make more ribosomes, which is something we later showed experimentally. If you want to find out more about this way of looking at cell phy­sio­logy, read a singularly eloquent essay by Fred Neidhardt.

Now, why have these papers survived all this time? After all, the norm is that older papers are superseded by more recent ones and soon forgotten (much to the surviving authors’ chagrin). So, why not these? My best answer is that, the success of the Copenhagen School notwithstanding, for a long time there was not much interest in what a whole cell does. Greater attention was paid to molecular mechanisms of gene expression, a reductionist view that only tangentially touches on cell growth. In Boston, I told the story that I had visited Francis Crick (of Watson-Crick fame) at the time and told him of our results. He said, "Congratula­tions, you started a new field. But it’s over!” In his view, the topic went from inception to oblivion in one quick step.

But why is this story being revived now, showing perhaps that Crick had been wrong? (Let me in­terject that several people who have "rediscovered" our work have been surprised that I'm still alive.) This work has become part of the infrastructure of Systems Biology (aka Growth Physiolo­gy), a point I wrote about elsewhere. To study the cell as a system, it pretty much has to be grow­ing. And our old work helped provide the basic parameters of cell growth. In the words of Terry Hwa, a physicist who has turned to such questions:

The microbial growth laws on the growth rate dependence of macromolecular compositions discovered by Schaechter et al. 50 years ago are among the most robust quantitative characteristics of microbiology. At the dawn of the era of systems biology, there is a renewed interest in these growth laws as concrete bridges linking molecular biology to physiology.

An aside. In my talk in Boston, I tossed out the offhand statement that my work in Copenhagen must have been influenced by the nature of the surroundings. Then, as now, that city had a ma­gical fairy tale ambiance, as if designed with Hans Christian Andersen in mind. Witness the photo included of the whimsical church spire that I could see from the lab window. Now I have no proof of this, and welcome comments about this conjecture, but my enchantment for that city must have affected my thoughts, as it did my feelings. At any rate, our lifestyle was Danish. We commut­ed and traveled to the countryside by bicycle, delighted in Danish pastry (the real stuff), open-faced sandwiches, and beer, and then returned to the US with a houseful of lovely modern furni­ture plus an appreciation for the social conscience of the Scandinavians.

Back to the Boston meeting. Surprising to me was that the large room where the session was held was over half full. Apparently these people had an interest in historical aspects of microbiology. Either that or they had nothing better to do.

Thanks for staying with me.

Many thanks for the kind comments sent in response to this post. Those who know me personally may agree that I tend to look forward rather than to dwell much in the past. So, it was an unexpected surprise to me that the event at the ASM General Meeting in Boston (the basis for this post), turned out to be so well received. I was dubious that anyone would be interested in the old stuff and quite amazed at the large audience (many of whom seem to have stayed for the whole session). For reasons I already explained, not many people have such a chance to share old work with scientists of today, at least without seemingly being a cause of immense boredom. I am truly grateful for this. 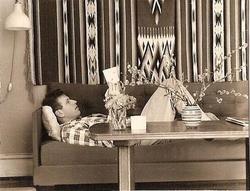 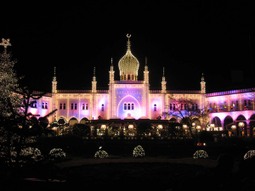 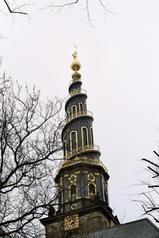 Our Savior’s Church, across
from the lab 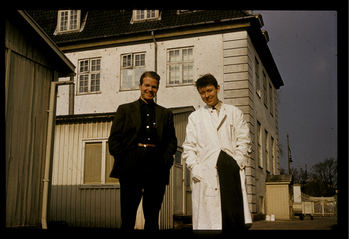