We translate and offer a post from the Spanish blog Esos Pequeños Bichitos (Those Small Bugs). 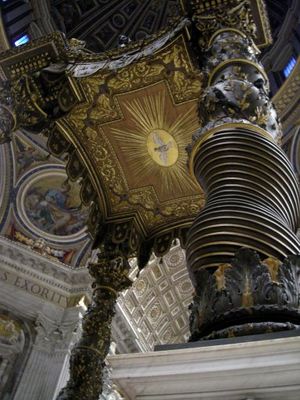 Bernini's baldachin (aka canopy of state) in the Vatican’s Basilica of Saint Peter. The helical columns remind us of the helical rails that transport proteins along the membrane of bacterial cells. Credit: Thiago.

The textbooks we used in the 20th century described bacterial division with one term, binary fission, implying a simple process. Nothing could be farther from the truth. Today we know that more than a dozen proteins are em­ployed to make the division septum in Escherichia coli. They assemble in a complex sequence and all are need­ed. In the absence of any one, subsequent assembly is not possible and division cannot take place. Before this machinery can be assembled, an initiator protein, FtsZ, becomes localized in the middle of the cell, where it makes a constriction ring.

The Search for the Center

There are at least two mechanisms that ensure the pre­cise location of FtsZ. One is that this protein does not function in the vicinity of the nucleoid (termed "nucleoid occlusion" by Conrad Woldringh.) The other way is inde­pendent of the nucleoid and relies on the local concen­tration of an FtsZ inhibitor called MinC (a mechanism proposed by Larry Rothfield.)

Likewise, there are two mechanisms for the establishment of this MinC gradient, with the greatest concentration being found at the cell poles. MinC is associated with a membrane-bound protein, MinD. The MinCD complex oscillates from pole to pole in E. coli with the help of a third protein, MinE. In Bacillus subtilis, on the other hand, the MinCD complex is attracted to a protein called DivIVA that is localized at the cell pole.

In either case, how do these proteins manage to travel the length of the cell? Investigators from the Slovak Aca­demy of Sciences and the University of York found that lipids in the membrane in B. subtilis make helical "rails" that bind MinD and its associated MinC. To detect these rails, the authors used fluorescent dyes that preferen­tially stain the particular phospholipid to which MinD binds.

B. subtilis division proteins distributed along the cell membrane by the helical "rails." Source.

There are other proteins that form helical bundles along the interior of the membrane of rod-shaped bacteria. One of them, MreB, is responsible for maintenance of the cell’s shape and cells become rounded in its absence. Even FtsZ and its accompanying pro­tein FtsA, two pro­teins needed for making the division septum, make in­tracellular helices.