News from the Department of Mimivirology 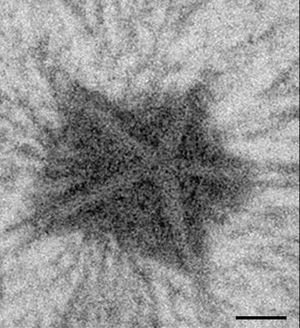 Combine the new imaging techniques with the colossal and eyecatching Mimivirus, and you'd expect some stun­ning images. A recently published paper does not dis­ap­point. The authors used several techniques to investigate how this virus packages its 1.2 million base pair DNA genome and then discharges it into an Acanthamoeba host during infection. Quoting the authors:

...we show that Mimivirus genome delivery en­tails a large-scale conformational change of the capsid, whereby five icosahedral faces open up. This opening, which occurs at a unique vertex of the capsid that we coined the stargate, allows for the formation of a massive membrane con­duit through which the viral DNA is released. A transient aperture centered at an icosahedral face distal to the DNA delivery site acts as a non-vertex DNA packaging portal.