There is nothing new under the sun.
Ecclesiastes 1:9

Ultrathin section TEM of a six-pointed star. The cell envelope (12 nm in thick­ness), which differs from that of both Gram-negative and Gram-positive bacte­ria, possesses the granular repeating structure characteristic of a bacterial S- lay­er. Bar: 100 nm. Source

King Solomon may be technically correct about the dearth of novelty, at least in its most general form. But that doesn't mean we can't be surprised, over and over, by things we've just discovered. For example, I would have thought that the basic shapes of bacteria would have been pretty well covered by now. After all, there are only a limited number of shapes available, right? Rods, spheres, and spirals seem to pretty well make up the bulk of the fundamental alternatives, with some varia­tions on these themes and a few oddities thrown in for good measure. So it came as something of a shocker when Wanger et al. reported they had found a bacterium sporting a unique cell shape.

While looking at the organisms embedded in deep "mine slimes" (biofilms) in South Africa, they observed a fila­men­tous bacterium that was star-shaped when exam­ined in cross section. Star-shaped bacteria have been seen before – for example, the genus Stella – and, of course, long rod shaped bacteria are com­mon. What had never been observed was a combination of the two. The authors aptly describe the shape as looking like the children's clay-like toy material, Play-Doh®, after it has been extruded by pressing it through a star-shaped opening. Or, for that matter, like churros ("Spanish dough­nuts"). Unexpected, unprecedented, and rather weird, actually.

Negative-stained image of a branching ‘star- shaped’ bacterium. Note that the ridges (the points of the stars in cross section) continue from one branch to another. Bar: 200 nm. Source

As always, we are immediately confronted with the two questions that hang over everything – How? and Why? – and, at the moment, there is no good answer to either. We're only now beginning to get a handle on the me­chanisms that produce the "normal" bacterial rod shape. A set of actin- and tubulin-like proteins (that is, MreB and FtsZ and relations) assemble in the cytoplasm and somehow direct the synthesis of a uniformly shaped cell wall. If you want to curve the cell, perhaps you add another cytoskeleton-like protein (crescentin or another intermediate filament-like protein.) But at first glance it is not at all clear how any of these mechanisms can be modified so that star-shaped "ridges" are created in a symmetrical pattern along the length of an otherwise rod-like cell. What is clear, at least, is that the shape is determined by the cell wall, since cells that have lysed, leaving empty shells, retain their star-shaped cross-section. 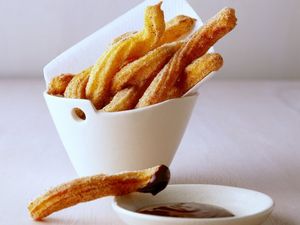 As to why such a bacterium would exist at all, Wanger et al. speculate that the cells may use the additional surface area to increase their ability to take up chemicals from a nutrient-poor environment. Unanswered by this suppo­sition, though, is why all bacteria in the same environ­ment don't adopt a similar shape if the strategy is such a boon for nutrient acquisition. The other curiosity is that although most individual cells had five points (itself an impressive symmetrical oddity) the population was com­posed of star-shaped cells with anywhere from 4–9 "points" (arms in the cross-section, ridges on the fila­ments). Are they all one organism with surface varia­tions? Are they different species that breed true? Are there survival advantages for having differ­ent numbers of arms?

"Curiouser and curiouser," said Alice (in Wonderland). And had she shrunk a bit more she could easily have applied the exclamation to microbial diversity and shape. There may well be "nothing new under the sun," but it is certain that understanding all the old things will keep us busy for a long long time to come.

Kevin D. Young is a Chester Fritz Distinguished Professor in the Department of Microbiology and Immuno­logy, University of North Dakota School of Medicine.