« News from the Department of Mimivirology | Main | Bloggers in Boston »

The Pathogen's Guide to Profiting From the Immune System

Ah, that amazing innate immunity and those equally amazing ways microbes respond to it! There seems to be no end of the variations in the choreography of host and parasite. Here are two intri­guing versions of that dance.

Mimicry, a tool for E. coli to fool innate immunity 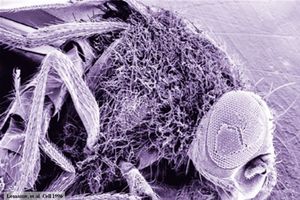 Toll was discovered in 1996 when the Dro­sophila developmental gene toll was knocked out. Mutants succumbed to massive fungal infection as shown here in this poor fly that has its eyes and its entire body replaced by fungal hyphae. Source: D. Schlöndorff, Klinikum der Univ. München; Munich / Germany

Uropathogenic strains of E. coli evade the inflammatory response by a cunning bit of mimicry. In an infected host, the response starts with recognition of the invaders. It works this way: cells (from flies to humans) have recep­tors called TLRs or Toll-like receptors that recognize mo­lecular components of microbes. TLRs are sensors through which the immune system recognizes the in­vaders and which set off the alarm reaction via signaling molecules called cytokines and chemokines. Inhibit the action of TLRs, and the invading organisms will escape harm.

According to a recent report, certain strains of E. coli make homologs of these receptors and use them to deceive the host cells. These bacteria secrete proteins that are similar in tertiary structure to the signaling domain of TLRs, thereby impeding the binding of adaptor proteins that are necessary to transduce the signal from the stimuli that set off the immune reaction. Most telling is that the TLR homolog is not carried by all E. coli strains. It is found in about 40% of those that cause kidney disease and in 20% of those causing bladder infection (cystitis), but is rare in fecal strains. The inflammatory response is more likely to matter in the kidney than in the bladder.

E. coli with mutations in that protein are less virulent in a mouse model of kidney infection, where they elicit re­duced cytokine production. In addition, the protein in question is secreted. Thus, the bacteria can jam the signals in host cells while still at a distance from them, in advance of the actual invasion. Other agents, such as vaccinia virus, Salmonella, and Brucella, may well use a similar strategy. And one more thing: the authors pro­pose that a drug known to inhibit protein secretion may turn out to be a new class of antibacterial agents.

The use of host cell features by pathogens is not news. What is news here is the suggestion that a host cell gene may have become integrated into a bacterial genome. There are scattered reports of eukaryotic genes being present in prokaryotes. Did the bacteria acquire a gene that functions in host defenses and turn it into a virulence factor? Given the close proximity of host and pathogen, one would expect that lateral gene transfer may well be rampant and that other such examples will be discovered. But this may not be right, and all that we are witnessing here may be a case of convergent evolution. Care to weigh in on this?

If you are highly resistant to the immune response and have to compete with more sensitive co-residents, you might as well set off a strong immune response, no? Salmonella in the intestine appear to do just that. This is indeed one tough hombre. It's one of the few bacteria that survives the chemical and enzymatic onslaught within the vacuole of a phagocyte, and it does well even in toilet bowls.

Demonstrating that S. enterica serovar Typhimurium exploits the inflammatory response to com­pete with other bacteria in the intestine required researchers from four countries and two conti­nents. They used mice whose intestinal microflora had been greatly reduced by treatment with streptomycin. When the intestine was infected with S. enterica, the other bacteria had a hard time re-colonizing the gut. Avirulent Salmonella strains that don't set off inflammation don't keep out the normal intestinal bacteria. Also, in a mouse colitis model, S. enterica competed well with the intestinal flora. Avirulent mutants did not, but their colonization ability was restored if inflamma­tion had been set off previously, as in mutant mice with inflammatory bowel disease or by co-infection with wild-type salmonella.

Instead of doing the competing themselves, these bacteria get the host to do it for them. In the authors' words: This reveals a new concept in infectious disease: in contrast to current thinking, inflammation is not always detrimental for the pathogen. And: These findings reveal a previously unrecognized strategy by which pathogenic bacteria overcome colonization resistance: abusing the host's inflammatory immune response to gain an edge against the normal microbial commu­ni­ty of the gut. This represents a first step towards unravelling the molecular mechanisms un­der­lying this three-way interaction of host, microbiota, and pathogens.