« Talmudic Question #33 | Main | News from the Department of Mimivirology »

The Tip of the Iceberg 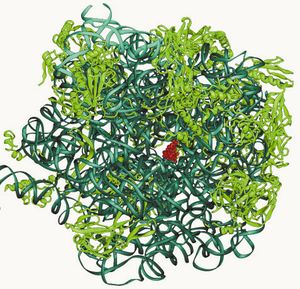 The position of erythromycin (red) within the large ribosomal subunit (RNA, dark green; proteins, light green). The view is looking from the active site into the protein exit tunnel. Erythromycin binds to the entrance of the tunnel and blocks the progression of nascent proteins. Source

We cannot read the popular press – let alone the scienti­fic literature – these days without realising that the resis­tance of dangerous pathogenic bacteria to currently used antibiotics is increasing at an alarming rate. Methicillin (or multiple) resistant Staphylococcus aureus (MRSA) is the most talked about, closely followed by vancomycin resistant Enterococcus (VRE) as well as multiple and extremely resistant Mycobacterium tuberculosis (MDR and XDR), but many clinicians see drug resistant Gram-negative respiratory pathogens as an even bigger threat, especially to immuno-compromised patients. It is com­mon­ly believed that Nature revealed all her valuable antibiotics after the Golden Age of antibiotic discovery that tailed off after the 1960s. Drug companies then turned to robotic or combinatorial chemistry in the 1990s to fill the gap, but the tens of thousands of novel mole­cules synthesised by this approach turned out not to be "druggable." A promising route to improved antibiotics is to do complex medicinal chemistry by genetics – combi­na­­torial biosynthesis – exploiting the flowering of the genetic understanding of natural product biosynthetic pathways in the late 1990s, but this is unlikely to generate novel chemical classes of antibiotics.

Alternatively – another product of the current explosion of genomic data for antibiotic producing microbes, especially for the actinomycetes, is the realisation that they encode the capacity to produce a vast array of interesting chemical entities that are not seen under typical laboratory screening conditions. Presumably these pathways have evolved to serve specific roles in the life of the organisms in their natural habitats, and they are expressed only under special conditions of the physical, chemical or biological environment of the soil. How can we wake up these "sleeping" genes and reveal the molecules that the pathways generate?

A recent paper from Kozo Ochi's laboratory provides one possible approach. Their earlier work had described examples of antibiotic resistant Streptomyces mutants with altered ribosomes that over-produced certain known antibiotics. The present paper takes this concept a step further. Using Streptomyces coelicolor and its blue-pigmented antibiotic actinorhodin as a convenient test system, they showed that the facile selection of successive mutations to different antibiotics – up to eight over a period of a few months – resulted in a huge increase in actinorhodin production. At least a part of this was attributed to modification of the stringent response, causing them to name the approach "ribosome engineering." The work involved the increased production of a known molecule, but the approach has also been shown to yield measurable quantities of molecules not normally detected – in other words to wake up sleeping genes.

The significance of this work extends beyond the specific mechanism involved in this case. Along with other recent demonstrations of silent antibiotic gene activation (for example, the work of the Leiden group headed by Gilles van Wezel on the global regulator DasR of S. coelicolor which sens­es the level of the key nutrient N-acetylglucosamine [See reference, below]), it provides a real hope that some of the enormous, cryptic potential of the actinomycetes to make chemically di­verse molecules may be exploited in the next few years.

Sir David Hopwood is John Innes Emeritus Fellow at the John Innes Centre, Norwich, England, and a Fellow of the Royal Society.