Your Name and Occupation? 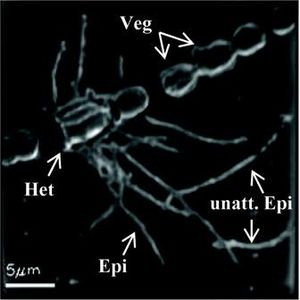 How would you like to be able to ask this question of an individual bacterium in its natural habitat – and get a truthful answer? It turns out that there is a way to do just that, thanks to a cool and innovative technique called Se­condary Ion Mass Spectrometry (SIMS). A current version, known as NanoSIMS, is basically a high-resolution micro­scope and a mass spectrometer in one. Sweet! (For a re­view of this technology, click here.)

NanoSIMS has a resolution of 50 nm, which allows one to visualize single cells and to analyze their atomic makeup at the same time. Here’s how:

...the surface of the sample is scanned with a small-dia­me­ter, high-energy primary ion beam, which excites the surface, breaks chemical bonds, and releases atoms and secondary ions from the specimen. Collect and focus the shrapnel-like secondary ions with an electrostatic lens and you can observe the sample directly! On their way to the visualization screen, the ions pass through a mass spectrometer. Images for five different ions can be obtained from the exact same micro-volume of the specimen!

Recently, Behrens et al. used NanoSIMS technology to simultaneously examine metabolic func­tions and phylogenetic identity in single cells within non-culturable microbial communities. (Al­though culturing is not required, isotopically-marked molecules must be fed to the community.) As proof of principle, they employed a mixed community of an unidentified Rhizobium and Anabae­na, a filamentous cyanobacterium that differentiates into specialized nitrogen-fixing cells called heterocysts. 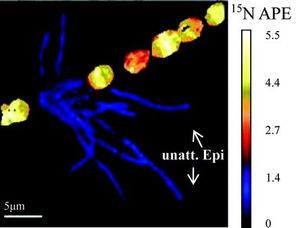 Localization of 15N in vegetative cells, he­terocysts, and attached epibionts, but not in unattached rhizobia. Most of the fixed nitrogen has been exported to the cyanobacterial vegetative cells. Color bars indicate relative signal strength.

To visualize metabolic activity, the authors provided nu­trients containing stable isotopes. The cells were grown in the presence of 15N2 gas and 13C-bicarbonate and then scanned via NanoSIMS to view enrichment for each of these isotopes. They found enriched amounts of 15N in both heterocysts and vegetative cells of Anabaena, as expected due to the rapid export of fixed nitrogen com­pounds from the former to the latter. 15N enrichment was also seen in the rhizobia of the community, but only in those in physical association with the heterocyst, not in rhizobia free in the medium. Thus, closeness to the heterocysts is necessary for the rhizobia to obtain fixed nitrogen. In contrast, the 13C images showed enrichment in all cells except the heterocysts, thus confirming what was previously known — that heterocysts lack an active carbon metabolism. 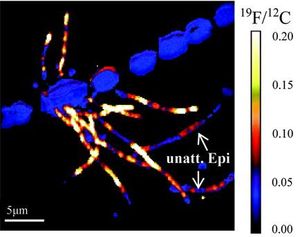 Others have used NanoSIMS to look at metabolic events, but the ingenuity in these authors’ system lies in how they identify the cells. One problem with traditional rRNA-directed Fluorescence In Situ Hybridization (FISH) is that when ribosome levels are low, there is not enough label to visualize the cells. These workers used “element labeling-FISH” (EL-FISH), employing phylum-specific oligonucleotides conjugated to horseradish peroxidase. When these probes bind, the enzyme becomes active and imports compounds called tyramides, which here have been attached to 19F-rich fluorescent dyes. This increases the cellular content of fluorine, which can be seen under NanoSIMS. When the 19F image is overlaid with the 13C and 15N images, individual cells can be assigned to phyla and their metabolic activity revealed!

This is breathtaking – to simultaneously view both metabolic and phylogenetic markers in indivi­dual cells of unculturable microbes. Clearly, NanoSIMS/EL-FISH has the potential to dissect the metabolic relationships within many environmental microbial communities, and that is a very exciting prospect! 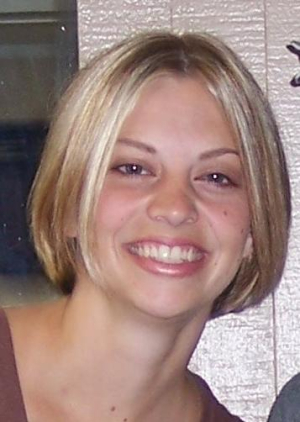 Jennifer is a microbiology graduate student in the Joint Doctoral Program of San Diego State University and University of California at San Diego.