Fine Reading: A New Colloquium on Fungi by the AAM

So begins the Executive Summary of a new colloquium from the American Academy of Microbio­logy entitled The Fungal Kingdom. Well! Speaking as a lover of mushrooms, why then did they adorn the pages of the report with attractive images of button mushrooms, chanterelles, morels, and sulfur tufts? 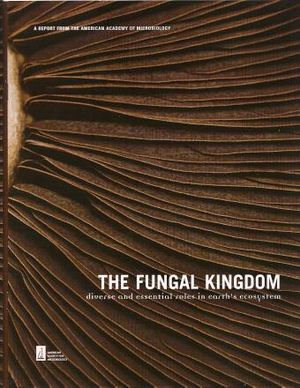 Kidding aside, of course one must agree with their state­ment. Fungi constitute a gigantic kingdom, enormously varied in who they are and in what they do. Their activi­ties are essential for life on the planet. Without their di­ligent decomposition of plant material , the carbon in plants would not be recycled. One would need a chain saw to walk in the woods.

What comes to mind when one thinks of fungi? Most people know that they can cause diseases in plants and animals, spoil foods, and carry out industrially important fermentations. The biologically sophisticated are aware that fungi include the yeasts, the paradigm of the eukar­yotic cell and our long-time partners in the making of bread, beer, and wine. They also likely know that fungi participate in important symbiotic relationships, as in mycorrhizae and lichens. Yet, as the report says: Ignorance and erroneous information about fungi abounds. The report goes about trying to correct this situation by delving in a clear and informative way into the realms of pathogenesis, genetics, and genomics – even the possibility of using fungi for bioterrorism. Had the purpose been to foster a greater interest in fungi in general, surely the authors would have offered a more detailed treatment of the role of fungi in innumerable symbioses with practically all other forms of life.

Befitting the purpose of such colloquia, the orientation is towards public policy, for which it makes a series of sensible and far-reaching recommendations. This is a fine compendium of clear think­ing and good writing, effectively highlighting what needs to be done in terms of research, educa­tion, and public planning in this essential area of the biological world.