« Fine Reading: A New Colloquium on Fungi by the AAM | Main | Summer Mirth » 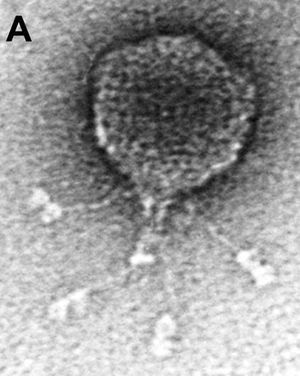 We are proud of our adaptive immune system, and right­fully so. Splendid is its ability to recognize and respond to foreign molecules – even ones never previously encoun­tered in our evolutionary history. Central to this is our tal­ent for generating antibodies and T-cell antigen receptors with many, many different specificities. We do it by keep­ing part of those proteins constant while reshuffling the nucleotide sequences that encode the ligand-binding sites. Theoretically, this reshuffling enables us to recog­nize more than 1014 different ligand sequences. This stra­tegy (immunologists call it GOD for Generation of Diver­sity) is not, we have come to learn, unique to vertebrates. Not even to eukaryotes!

Enter bacteria and their phages. Bordetella is a genus of β-proteobacteria that includes pathogens responsible for respiratory infections such as whooping cough in hu­mans. When Bordetella bronchiseptica is infecting a host, it makes various virulence factors including pertactin, a surface protein used in attaching to the tracheal epithelial cells. When living outside a host, it doesn't make pertactin. These Bordetella are hosts for a temperate phage that recognizes and attaches to pertactin via a tail fiber protein called Mtd.

Since pertactin comes and goes depending on the state of the Bordetella, this creates a bit of a problem for the phage. As you would expect, when the bacteria are in their non-infectious phase, phage infection is greatly reduced. Greatly reduced, but not eliminated. Approximately one phage in a million can infect Bordetella lacking pertactin. They do so by virtue of having an altered Mtd protein with a different binding specificity. Remarkably, Mtd is exceedingly variable, and therein lies the tale.

How does such variability arise? The answer involves a special mechanism first described in these phage.

The variation among the mdt genes is restricted to 22 hotspots that are located within a 134 bp region at one end of the gene. Close to the mtd gene is a "template" copy of that 134 bp sequence. This template is identical in all the phages and has an adenine at each of the 22 hotspots. Furthermore, lurking nearby is a gene for a reverse transcriptase. Putting all this to­geth­er, researchers in J. F. Miller's lab found that sequence information is transferred unidirectionally from the template copy to the mtd gene by a process that involves the reverse transcriptase. Du­ring this transfer, mutations are introduced at some of the adenine hotspots in the mtd gene. The mutated mtd gene is then used to make the mRNA for the tail fiber proteins for the progeny phage, hence possibly conferring on them an altered host specificity.

Given that there are 22 hotspots in the mtd gene, any or all of which can be mutated, this phage is theoretically capable of producing almost 1013 different Mtd proteins. This is approaching the level of diversity seen in our own immune system. Recently, a close look at the folded Mtd protein showed that mutations at those hotspots altered the amino acids that are located in the host re­ceptor-binding site – again reminiscent of our immune system's strategy for varying binding speci­ficity without disrupting the protein scaffold.

This mechanism for generating diversity has been awarded a name of its own: diversity-generat­ing retroelement, or DGR. As of 2007, DGRs had been found in nearly 30 diverse bacterial and phage genomes. The list of eukaryote-specific talents grows ever shorter. Makes you wonder if eukaryotes invented anything.