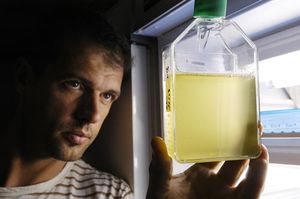 You may have heard that the smallest free-living eukar­yote is Ostreococcus tauri. So they say. O. tauri is indeed a tiny green alga. It is endowed with just one chloroplast, one mitochondrion, a Golgi body, and not much cyto­plasm. Sometimes it is only 1.0 μm in diameter – yes, smaller even than quite a few prokaryotes. But it is not alone in this respect. In the oceans and elsewhere, one can find lots of other very small eukaryotes.

Collectively they are known as the picoeukaryotes; when combined with bacteria, they make up the marine pico­plankton (that is, cells 0.2–2 μm in diameter). Although most picoeukaryotes look pretty much alike, they encompass a very diverse group within that catch-all category, the protists. By and large, they have been known for only five or six years, so this is news to many of us. Big news in fact, because they are present in numbers ranging between 103 and 104 cells/ml of seawater. A rough calculation says that their cumulative weight in the ocean (using around 1024 ml as a guess for the volume of the likely habitats) amounts to about 109 metric tons (that's the weight of some ten million blue whales). Say we're wrong by a couple of orders of magnitude, there are still lots of them. This is also the estimated weight of all marine phages, which are some 1000 times more abundant but also about 1000 times smaller than the "picos." 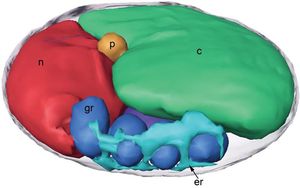 What do these miniaturized eukaryotes do? The marine picoeukaryotes seem to be about equally divided be­tween phototrophs and heterotrophs. The former con­tribute much of the total oceanic photosynthesis, ap­parently outdoing the most abundant phototrophic cyanobacteria, Synechococcus and Prochlorococcus. In a study of central North Atlantic surface waters, only 10% of the surface picoplankton consisted of eukaryotes. But being larger than bacteria, they accounted for 60% of the biomass and 68% of the photosynthetic production. Ecologically speaking, cell size suggests the level a uni­cellular organism occupies in the food chain. Given that phagocytic organisms tend to prey on those smaller than themselves, picoeukaryotes would be found near the base of food webs.

Some picoeukaryotes, such as Micromonas pusilla, can be grown in pure culture, but so far most cannot. Even when they cannot be cultured, we know they are there thanks to fluorescence and electron microscopy, flow cytometry, and metagenomic analysis. Several of these organisms appeared ideal for use as model systems and thus are being intensively investigated. O. tauri is one of those whose genomes have already been sequenced. Befitting its size, it has a small and very compact genome. Its 8000 or so genes make up a hefty 82% of its 12.5 Mb genome. To date, O. tauri also has the distinction of being the only eukaryotic cell that has been observed in its entirety by electron cryotomography. We have previously mentioned Cyanidioschyzon merolae in these pages. This has been the organism of choice for studying how single organelles in a cell are replicated and then accurately distributed to the daughter cells upon cell division. It turns out that its single mitochondrion be­comes attached to the mitotic spindle! Another startling finding is that some of its tRNA genes are circularly per­muted, as are the genomes of some phages. But C. me­rolae does it differently, their halves being in a backward orientation with the 3' half of the gene being upstream of the 5' one.

Picoeukaryotes are among the most abundant of our fel­low travelers on this planet. They deserve our attention.