« Talmudic Question #35 | Main | Fine Reading: A New Colloquium on Fungi by the AAM »

It was two years ago that I offered to my sister for her birthday the DVD set of Planet Earth (won­derful tales by David Attenborough that I recommend to everybody), and I started to watch some episodes with her. A particular episode was memorable for both of us, as we watched an ant being literally possessed by an infecting fungus. It was such a strange notion, that this ant could be manipulated to leave its colony, climb upwards on a stem, clamp its mandibles to securely hold the stem…and die there! The vision of this fungus slowly growing out of the ant's head was by far the strangest and most amazing thing that I got to see on television. My little sister, who never got to close her mouth during this whole time, finally looked at me with her big eyes and said, "This is SO cool!! How does it work?? Have you ever studied this in one of your classes?"

(unfortunatley, the video is no longer available in 2014)
From David Attenborough’s BBC Planet Earth. Programme 3: Jungles. 2006

“No”…but it is not true anymore.

Here I was, in our last Integrative Microbiology class, listening to our fungus master Elio as he started talking about fungi and their ability to manipulate their hosts to ensure their dissemi­na­tion. It still sounded like the craziest thing I have heard in microbiology, until I made the connect­ion with the Attenborough episode! So I decided to talk about this; many people in this class might do the same, but I want to take it more as an anecdote. 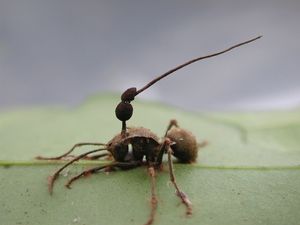 Ant with a fruiting body of a Cordyceps-unilateralis

The fungi responsible for this deadly behavior are mem­bers of the genus Cordyceps, which contains more than 400 different entomopathogenic fungi. Many of them have become specialized and infect only one particular insect, but the list includes grasshoppers, weevils, and many others. In the example of the ant, many of them can be infected by a Cordyceps. The carpenter ant or the bullet ant can be the unfortunate recipient of spores of Cordyceps unilateralis. The spores attach to the exoske­leton of an ant and germinate, a necessary step before entering the body of the ant. The exoskeleton of the ant contains holes called spiracles that allow the ant to breathe; these spiracles are the port of entry of Cordyceps, which arrives in the tracheae of the ant. The fungus starts growing inside the ant’s body cavity and forms mycelia while feeding on the soft tissues of the host; however, it does not attack the vital organs of the ant, thus it keeps it alive.

When the time to sporulate has come, Cordyceps starts invading the brain of the ant, which re­sults in a severe alteration of its behavior. The ant leaves its colony, and oddly enough, climbs up a stem. Eventually, it attaches itself to the stem by using its mandibules; there, it slowly dies as the fungus feeds on its brain. Soon, from the gaps made by the joints of the exoskeleton, the fungal fruiting bodies containing the spores start to make their way out of the ant's head, and grow for up to three weeks. As the final step, the fruiting bodies release spore capsules which, on their way down to the ground, explode to unleash all the spores to be disseminated. One can then appreciate the strategy of the fungus; by manipulating the ant's mind and forcing it to go to a higher altitude, the fungus ensures dissemination over a large area, where it can infect again a multitude of ants in the ground. One fungus is able to infect and decimate an entire colony through this strategy!

I tried to find in the literature an article that explained how the fungus was able to manipulate its host; as the behavioral change seems extremely well regulated. Unfortunately, as Elio said, nobody seems to know much at this point. Also, in an ant colony, the workers have developed a way to "detect" infected individuals and then remove them quickly from the colony. How have they learned to identify the victims? Is it something they see or something they smell?

So why did I choose this particular example? Because it is so fascinating that I would like to share this story with the people around me, as Elio did with us. Because my sister, who is in Political Sciences, can still remember how oddly beautiful these pictures were. And finally, because I think it only reveals the many questions that deserve to be studied and answered. Surely, if the mechanism of this parasitic relationship is entirely deciphered, it will end up on this blog. I will keep looking there.

Ilham is a microbiology graduate student in the Joint Doctoral Program of San Diego State University and University of California at San Diego. This was her answer to an exam question: Discuss a phenomenon characteristic of all or just some fungi that you have found particularly exciting.