But Is It Good to Eat?

This is the Week of the Fungi on STC, a sporadic undertaking. It is our way to hail the start of the mushroom collecting season, which in most temperate regions is in the fall. 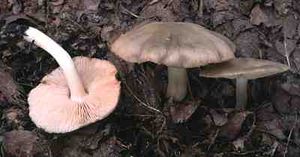 Entoloma rhodopolius from Japan. This spe­cies is also found in North America and Europe where it seldom causes poi­sonings. Source: Chiba Museum

If you are into wild mushrooming, the question you'll be asked most often by someone holding a specimen is: Is it good to eat? I sometimes answer with a dyspeptic: Be­fore I tell you, would you recognize it if you saw it again? But now I have a more friendly answer: Go ahead, cook the mushroom, then do real-time PCR. Japanese re­search­ers (from 7 different labs) recently reported that this works very well, at least for telling four poisonous species apart from 27 edible ones. The PCR primers they used were designed for the rDNA ITS (Internal Tran­scribed Spacer) regions of the poisonous species – a region often used in fungal and other work. The poisonous mushrooms gave a clear signal, the edible ones did not.

What kinds of specimens did they test? Some were collected specimens, others cultivated. But most importantly, they applied the technique to cooked mushrooms. Cooking mushrooms ren­ders them rather difficult to identify. I should know. When dining with friends in a restaurant that serves a dish with "wild" mushrooms, I'm often asked: So, what is it I'm eating? I can usually guess the broad group to which the tasty morsel belongs (boletes, chanterelles, morels, maybe shiita­kes), but that's about it. No way could I say with certainty that the mushroom is edible. Of course, I could resort to the old gag: You can eat any mushroom once! But the authors took this to heart and cooked up their mushrooms before analyzing them. The paper even provides their recipes for baking, deep frying, stir-frying, or cooking them tempura style.

The four species of poisonous mushrooms they included are responsible for 85% of the recently reported mushroom poisonings in Japan. These are not among the more common American or European culprits, but there is no reason to believe that the technique could not be adapted to our poisonous species, as well.

Carrying a PCR apparatus into the woods for identification purposes wouldn’t be too handy, but with their technique you don't have to. Bring the specimens home, cook them up however suits you, then – please! – PCR them before eating.