« Fiddling with Fungi | Main | The Mush in Mushrooms »

Mid-week...the third of five installments celebrating the Week of the Fungi on STC. 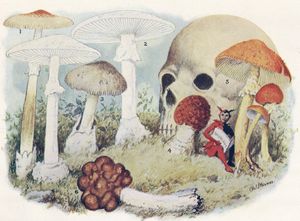 A bouquet of poisonous mushrooms. Number 3 is Amanita phalloides. From McIlvaine, C. 1900. One Thousand Ameri­can Fungi. The Bowen-Merrill Company, Indianapolis

Nasty stuff, those toxins responsible for the toxicity of deadly poisonous Amanita mushrooms. They are pretzel-shaped, bicyclic octa- and heptapeptides known as ama­toxins and phallotoxins. One of them, α-amanitin, is fa­miliar to many as a handy reagent for inhibiting RNA Po­lymerase II in the lab. Another one, phalloidin, binds to actin and inhibits its depolymerization. Made fluorescent, it's a convenient way to stain for actin. Phallotoxins are not effective by mouth because they are poorly ab­sorbed. Amanitins are responsible for most of the cases of serious mushroom poisoning, including most fatalities. Incidentally, these are not absorbed all that fast either. Symptoms don't usually become apparent for 12–24 hours after ingestion so if you get sick soon after eating a wild mushroom, it wasn't a deadly Amanita and you'll likely be OK by the next day. Those stories about keeling over right after a great mushroom meal are fictions. 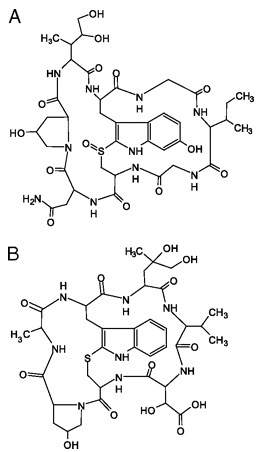 Structures of α-amanitin (A) and phalla­cidin (B). Source

How are these odd-looking, highly-modified peptides made? There are two basic methods used by various organisms to make their own particular peptides. One way is to start with a "normal" protein synthesized using mRNA and ribosomes, cleave off a short section, and then modify it. The other is enzymatically, employing dedicated nonribosomal peptide synthetases. Some peptides are made one way, some the other. Many bac­terial and animal peptides are made using ribosomes, but until recently all known cyclic peptides in fungi were the product of peptide synthetases. These mushroom toxins, it turns out, are the exception, being the cleavage product of proteins. We know this because scrutiny of the genome of one of the deadly amanitas, A. bispori­ge­ra, revealed genes for two of these toxins. These toxins are synthesized as proproteins 34 or 35 amino acids long and then cleaved by a prolyl oligopeptidase. These genes are found in other poisonous species but not in 12 harmless relatives. (Not all amanitas are poisonous; some are actually prized edibles. But please, until you know for sure who is who, stay away from them all.)

What good does this for to the poor schnook who ate poisonous mushrooms? Probably not much.