This is the second of five installments celebrating the Week of the Fungi on STC. 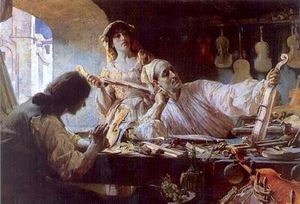 Next time you hear a dazzling violinist play on an excep­tional instrument, think fungi. (Yes, I can hear it: Here he goes again, playing his old refrain: fungi, fungi…) The reason is that fungi may help us to produce instruments that, at long last, may be comparable to those made by Stradivari and others in the Northern Italian city of Cre­mona in the early seventeen hundreds. Just how good are Strads? George Eliot said (I paraphrase): God could not make a Stradivarius without Stradivari. Click here for a discussion and snippets of music played on Strads. The reason for their exceptional quality has long been sought. Notions abound.

One of them has to do with the Little Ice Age when the violin maker lived, which provided him with wood from trees whose tissues were less dense because of the climate. So, how to put this idea to use?

Swiss and German wood scientists combined their efforts and subjected pieces of wood to "selective decay" by fun­gi that cause "just right" decay. They used Physisporinus vitreus (a basidiomycete) and Xylaria longipes (an asco­my­cete), both known for their ability to degrade the cell walls, leaving the lignin. Incubation with either one for 20 weeks resulted in thinning of the cell walls and improve­ment in acoustic properties.

So, why not test this idea? Sure enough, they are making six violins, three from treated and three from untreated wood. These will then be played by experts in a blind test by the end of this year.

Will this study reveal Stradivari's "lost secret?" Listen for the answer six months from now.