Two Greek philosophers, Heraclitus and Democritus, found the human condition vain and ridi­cu­lous, but Democritus always appeared with a jeering and laughing countenance, whereas Hera­clitus commiserated our condition with a sorrowful look and tears in his eyes.
Michel De Montaigne (1533–1592) 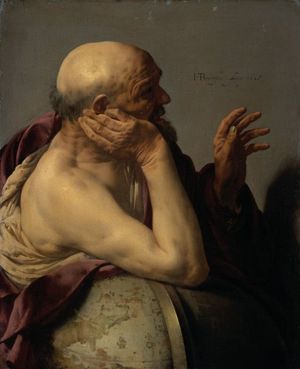 While philosophizing about what is a species, should one laugh or cry? Maybe it matters how you feel at the mo­ment. For me (Elio), that’s the case. In my bilious mood, I despair about the chances for a useful, encompassing, and consensual definition. But when I feel more jovial, I applaud the continuous efforts of erudite biologists to grapple with this, possibly the most intractable of all bio­logical predicaments. Month by month, new ap­proaches are put forward, many borne out of newly acquired ge­nomic and ecological information, and their accompa­nying mindsets. Perhaps the Holy Grail will one day be found. Meanwhile, we recently offered some mirth.

We have thought about this issue often, and what brought it up just now is a paper showing that two bacterial species (allow us to call them that) can not only diverge from one another, but can, in fact, converge, possibly to become one again. Re­gardless of how you define species, the pheno­me­non is interesting. The creatures in question are Campylobacter jejuni and C. coli, two distinct gastroenteritis-causing pathogens whose house­keeping genes have only an 85% sequence iden­tity, well below the 94–97% cut-off point often used to delineate bacterial species. (Salmonella and E. coli, thought to have diverged 120 million years ago, also display about the same percent iden­tity.) It looks like C. coli acquired genes from C. jejuni on multiple occasions, which is blurring the species difference between the two. 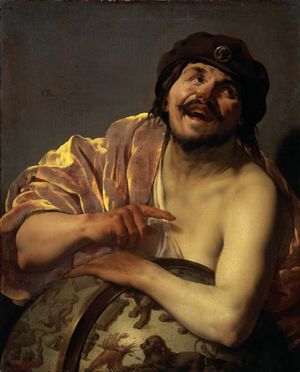 (above) Heraclitus, the "weeping philo­so­pher." (below) Democritus, the “laughing philosopher.” Both by Hendrick ter Brug­ghen (1628)

The research reported is based on the multi locus se­quence typing (MLST) method widely used to type bac­terial strains. MLST involves PCR amplification and se­quencing of fragments of seven unlinked housekeeping genes, followed by assembly of the sequences into 3309 base pair haplotypes. The MLST sequences from several thousand isolates were already available in the Campy­lobacter database. These researchers set to work ana­lyzing this data. They found that more than 99% of the ha­plotypes fell neatly into one or the other of the two species. However, there were some mixed "hybrid" ha­plotypes, typically C. coli that contained sequences from C. jejuni. Most of these showed up within one of the three C. coli clades (clade 1).

More genes moved from C. jejuni to C. coli than went the other direction. Since most of the gene acquisitions were found in C. coli clade 1, the transfer occurred after it di­verged from clades 2 and 3. Some of acquisitions may have been quite recent, as many of the imported sequences are identical to those in the donor population. Swaps of this sort leading to “despeciation” happened on multiple occasions, and at least four times more frequently than those leading to divergence. As the authors state:"if main­tained over time, these rates would lead to progressive genetic convergence. Well, if so, then at just what point should the recipient C. coli’s be considered "hybrids" and no longer the original species?"

Illustration of the genetic divergence and a scenario for despeciation of C. jejuni (gray) and C. coli clades 1 (blue), 2 (yel­low), and 3 (red). Between time t–2 and t–1, Campylobacter split into two separate species, C. jejuni and C. coli. Between t–1 and the present (t0), C. coli further sepa­rated into three distinct lineages repre­senting incipient species. At t0 C. coli clade 1 starts to accumulate genetic ma­te­rial imported from C. jejuni, owing to expansion into a novel agricultural niche. By t1, recombination has been sufficient to make strains with a clade 1 clonal ori­gin indistinguishable from C. jejuni. A more speculative projection would be that the change in environmental con­di­tions could also have a substantial effect on clade 2 and clade 3 strains, with an ele­vated rate of exchange with the cos­mopolitan and numerous C. jejuni clade 1 bacteria, which could lead to complete despeciation at the nucleotide level by time t3. Source.

An interesting point is that the imported C. jejuni genes are found more often in C. coli strains isolated from do­mesticated cattle and birds, thus suggesting that humans may have played a role in reversing the usual pattern of divergence by providing new hosts that are shared by both species. Maybe. Whatever the impetus, these two bacteria do not behave like good God-fearing species because the genetic barriers between them are quite porous.

What to make of this? In principle, lateral gene transfer should be a two-way street, with genes able to travel in both directions—sometimes even back to the organism they came from. So, are we witnessing something new? Perhaps not in kind, but in an altered pattern due to our altering the selective pressures that operate on “species” selection. The authors lament:"Humans continue to cause rapid and extensive environmental change. Pre­existing environments have been degraded, and novel ones, such as intensive farms or acid mine drainage areas, have been created that provide a new adaptive landscape and opportunities for hybrid forms to evolve."

Nature seems to be able to put Humpty Dumpty back together again, a lively demonstration of the plasticity of the prokaryotic (and probably also eukaryotic) species. In this game, nothing stays the same. As Heraclitus, the "weeping philosopher" of the painting, said: Пάντα ρεΐ (panta rhei, everything is in flux). Is it ever!