The Fastest Flights in Nature

If you were a fungus growing on dung and if, for propagation, you depended on having your spores ingested by an animal, you'd have a problem. Few animals graze near their poop. The so­lution would be to evolve a powerful discharge mechanism that ensured that your spores traveled far afield. In the words of a pioneer in this area, Nik Money: "Evolution has overcome this obstacle by producing an array of mechanisms of spore discharge whose elegance transforms a cow pie into a circus of microscopic catapults, trampolines, and squirt guns." 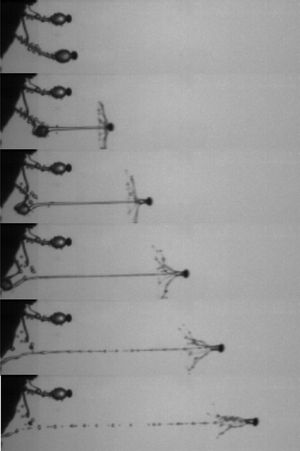 Sporangiophore discharge in Pilobolus kleinii captured with high speed video. This illustration is a montage of 6 images from a video obtained at a frame rate of 50,000 frames per second. The selection shows every 10th frame, representing 200 microsecond intervals. The launch is completed in <0.25 milliseconds or <1/400 of an eye blink. (Incidentally, 'Pilobolus' is also the name adopted by a famed American dance company.)

A paper from Money's lab at Miami University in Oxford, Ohio, and colleagues at the College of Mount St. Joseph in Cincinnati, Ohio, reveals how fungal squirt guns fire spores over distances of more than 2 meters. The re­search­ers used high speed cameras running at up to 250,000 frames per second to capture these blisteringly fast movements.

Click here to view a montage of high-speed video clips showing sporangiophore discharge in Pilobolus kleinii. The videos were made at camera frame rates of up to 250,000 fps. Each discharge is completed in Anvil Chorus from Verdi's Trovatore.

Spores are launched at maximum speeds of 25 meters per second – remarkable for a microscopic cell. This corresponds to accelerations of 180,000 gn, no less! In terms of acceleration, these are the fastest flights in nature. The fungi studied were two ascomycetes (As­cobolus immersus and Podospora anserina) and two zygomycetes (Pilobolus kleinii, and Basidiobolus rana­rum).

How do these fungi do it? Fungal cells make use of os­mo­tic pressure, but just how is the pressure generated? The authors identified several sugars and other osmolytes responsible for the water influx into the guns. The long flights of spores do not result from unusually high pressure but from the explosive way the pressure drop is harnessed for spore propulsion. There appear to be some similarities to the expulsion of ink droplets through nozzles on inkjet printers.

As the authors state in a press release:"This information is very important for future biophysical studies on spore and pollen movement, which have implications for the fields of plant disease control, terrestrial ecology, indoor air quality, atmospheric sciences, veterinary medicine, and biomimetics."

We thank Nik for providing us the movie. We had featured his work on the discharge of spores in basidiomycetes (which include mushrooms) previously. An interview with Nik broadcast on CBC radio is also available. (Scroll down to the third program segment.)