You Can't Judge a Book by Its Cover

To invent, you need a good imagination and a pile of junk.
Thomas Alva Edison 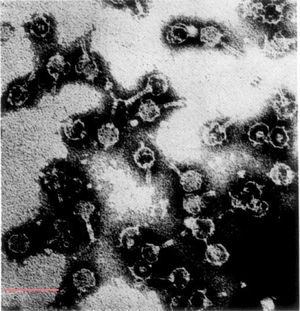 An electron micrograph of GTA particles from R. capsulatus made soon after their discovery (1979) showing their resem­blance to tailed phages. Negative staining with phosphotungstic acid. Bar = 100 nm. Source

Bacteria run a tight ship. Compared to many "higher" plants and animals, they have a larger proportion of coding and regulatory DNA, a lesser percentage of "junk" DNA. Nevertheless, there is some "junk," including, among other things, relics of past infection by temperate phages. These "defective prophages" often include some recognizable phage genes. On more than one occasion, a bacterial lineage has put such a phage remnant to work for its own purposes, specifically to transfer segments of its own DNA to other members of the same species.

This was first noticed over three decades ago when re­searchers observed an odd sort of transduction in Rho­dobacter capsulatus. Genes were being transferred from one bacterium to another and some virus-like particles were on the scene, but there was no observable cell lysis, no viral infection. The particles did look like small, tailed phages, but they were remarkably small – too small to contain enough DNA to encode even their own proteins. Odd. Further investigation revealed that each one contained a random ~4.5 kb segment of DNA from the bacterial chromosome (or any plasmids that happened to be loitering about in the cell). Seemingly any region could be packaged. These particles appear to have no function other than the transfer of genes between members of the same species, and so they were named gene transfer agents, or GTAs.

Although variations on the theme have been found in diverse bacteria (for example) and archaea (for example), the well-studied R. capsulatus GTA remains the model system. It contains a cluster of 15 phage-related genes, including genes that encode the capsid proteins and the DNA packag­ing machinery. Notably, genes required for phage self-replication and cell lysis are nowhere to be found. This cluster makes up an operon whose transcription is controlled by the bacterium using a typical two-component regulatory system. Both cluster transcription and GTA production increase more than 4-fold when the cells enter stationary phase. Quorum sensing also plays a part, with long-chain acyl-homoserine lactones reported to be the signals. 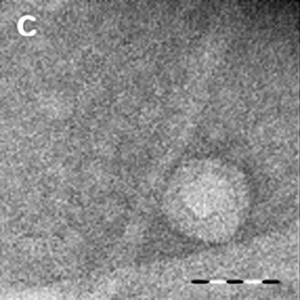 Where did this GTA come from? It is thought most likely to be an ancient remnant of a prophage acquired by a common ancestor of the α-proteobacteria. Homologs have been found only within that group. There they have been identified in 55 of the 102 sequenced genomes, with the majority of those 55 being marine bacteria. (For details, click here.) Also suggesting a possibly significant role in the marine environment is their presence in 21 of the 22 genome sequences from the Roseobacter clade, a group that makes up 20% of the prokaryotic community in some marine environments. However, a recent ana­lysis of metagenomic data for marine bacterioplankton found that less than 0.2% of the population have a GTA gene cluster. If you were rooting for the GTAs as major players here, take heart. The metagenomic data is skewed by the sampling method used which filtered out large cells and cells associated with ag­gregates – the very population where GTA-mediated gene transfer might be most significant, given the role of quorum sensing in GTA production.

So, which came first, the phage or the GTA? You would ask!