Fine Reading: A Quick Guide to the Bacterial Flagellar Motor 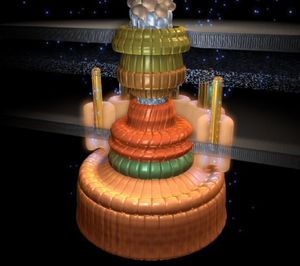 The flagellar motor (schematic diagram) is a macromolecular assembly made of approximately 20 different proteins. It extends from the cell interior (bottom) to the exterior (top), spanning across three membranes: first the cytoplasmic mem­brane, then the peptidoglycan layer, and lastly the outer membrane. Its compon­ents are termed the rotor, stators, drive shaft, bushing, rotation-switch regulator, and so on. Source

The bacterial flagellar motor deserves great write-ups. Hardly anything in biology is more fascinating than this marvel of miniaturization. Not surprisingly, this smallest and most perfect of electric motors has a worthy advo­cate. Howard C. Berg of Harvard, who has himself contri­buted a great deal to our understanding of how the fla­gellar motor works, has written a short but powerful précis in Current Biology. It will take you but ten minutes to read it, unless you pause and think about the many gems therein.

Here are some samples:

...the flagellar motor knows nothing about inertia; it does not have a flywheel. If it puts in the clutch, it coasts to a stop within about a millionth of a revolution.

...Response to chemicals (towards attractants or away from repellents) is the best-understood sensory modality, and is called chemotaxis. This term is a misnomer because cells do not steer towards a source of attractant (or away from a source of repellent), they simply back up or try new directions at random. Then they decide whether life is getting better or worse. If it's getting better, they tend to keep going in the same direction. If it's getting worse, they don't worry about it; they go back to what they were doing in the absence of a stimulus.

We are thankful to have someone in our midst with such edifying skills.

For a vivid animation illustrating the self-assembly process, click here. Once the FliF ring (in brown) has formed in the cytoplasmic membrane, other protein molecules are self-assembled on this structural base, one after another, in a well-defined order. All the axial component proteins of the flagellum are synthesized in the cytoplasm and transported by the type III flagellar protein export apparatus through the long narrow central channel to the distal end of growing structure, onto which they self-assemble. Credit: Protonic NanoMachine Group, Graduate School of Frontier Bio­sciences, Osaka University.

Sadly, that article will cost me money to get, since we don't have a subscription here (once again, Jon Eisen, you are correct about open source publishing). But you can rest assured I will get a copy. That, and your video, is PRECISELY the kind of thing my students---who only get ONE microbiology course---need to see.

I particularly loved the "translation" of power and speed of the flagellar motor from the "nanoscale" to the macroworld. It's like telling students about the length of the DNA molecule within a single cell of E. coli, and the necessary viscosity of resultant nucleoid, which in turn must somehow yield up the correct DNA sequences for transcription at a moment's notice.... In other words, starting with something seemingly straightforward, and then moving the students' attention toward the way reality exists at the microbial scale. It changes the way students, and professors, see everything. Or should.

Back to my old friend Pliny: “Nature is to be found in her entirety nowhere more than in her smallest creatures."