How Many Genomes Does It Take to Change a Light Bulb? 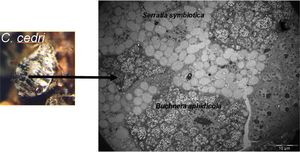 Figure 1. The cedar aphid and a TEM of a cell containing two endosymbiotic bacte­ria. Courtesy of A. Latorre and J. M. Go­salbes

Let me rephrase that. How many genomes does it take for an aphid to make tryptophan? If you thought it was one, you'd be wrong: the answer is two, neither being the aphid’s. Remember that aphids live off plant sap that is poor in some amino acids? And that they get some of the missing amino acids from the metabolism of an endo­sym­biont, Buchnera aphidicola ? That’s true enough, but it turns out that in the cedar aphid, Cinara cedri, the re­sident Buchnera has lost its ability to supply the host with tryptophan. According to investigators from the Univer­sity of Valencia, Spain, this Buchnera carries the trpEG genes on a plasmid, but lacks trpDCBA, the remaining genes of the pathway. 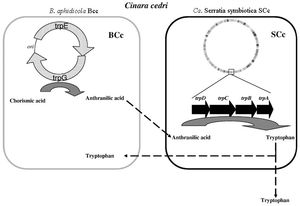 This genic foursome is located on the chromosome of another symbiont, Candidatus Serratia symbiotica. (To remind you, Candidatus means that the bacterium has not yet been cultivated. In Roman times, candidatus re­ferred to a soldier awaiting promotion.) Both symbionts are present in about the same number within specialized cells, the bacteriocytes. Why this division of labor? This is grist for the evolutionist's mill. We invite your views.

Such a complementation of metabolic abilities is far from unique to this aphid. An even more pervasive example of division of labor is seen in a sap-feeding insect, the leaf­hopper known as the glassy-winged sharpshooter (Homalodisca coagulata). According to McCut­cheon and Moran, bacterial endosymbionts act as separate biochemical supply houses. (We dis­cussed an earlier 2006 report from Moran and others here.) 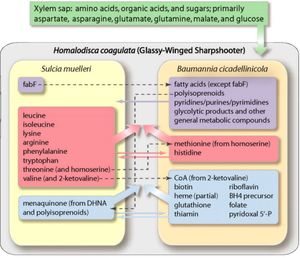 Figure 3. The metabolic contributions of Sulcia and Baumannia to the glassy-winged sharpshooter. The major con­stituents of the sap are shown in green, above. The large colored arrows show compounds produced by the symbionts and needed by the host; the small colored arrows indicate hypothesized sharing between symbionts. Source (Click to enlarge)

As determined by their coding capacities, one of the sym­bionts, Sulcia muelleri, a member of the Bacteroidetes, provides nine amino acids plus a gene for fatty acid syn­thesis. This is pretty sporty of this organism, because its highly reduced genome (a mere 245,530 bp) encodes a paltry 228 protein genes. The other symbiont, the γ-pro­teobacterium Baumannia cicadellinicola, supplies two amino acids and a gemisch of fatty acids, coenzymes, purines, pyrimidines, plus a collection of other meta­bolites.

This story matters to wine makers and wine drinkers because the sharpshooter carries the bacterium Xylella fastidiosa, the agent of the grape vine killing Pierce's disease. Click here for more on symbioses between sap-feeding insects and bacteria.

Examples of multiple-partner symbioses range across phyla. A marine worm, the oligochete Olavius algarvensis, lacks a mouth, gut, and nephridia (kid­ney-like organs). To make a living, this worm needs the work of no less than four symbiotic bac­teria. These symbionts oxidize sulfur, reduce sulfate, and fix carbon, thus providing the host with varied sources of nutrients. 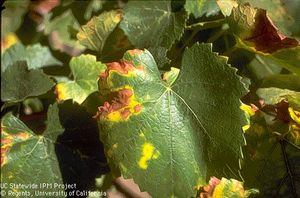 Figure 4. Pierce’s disease of grapevines, caused by the bacterium Xylella fasti­di­osa, which is transmitted by a sym­biont-carrying glassy-winged sharpshoot­er. Source

The symbionts also participate in recycling of the worm's waste products, which may be how the worms make do without an excretory system – a unique skill among this group of animals. (Fig. 5).

Lynn Margulis once called ours the Symbiotic Planet and wrote a book by that title. Hardly an overstatement! This would be a good time to read the review on symbiosis as an adaptive process by Nancy Moran. 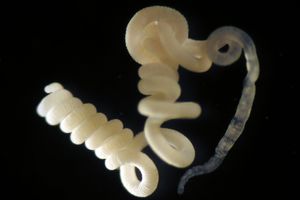 Figure 5. Olavius algarvensis, a gutless worm that shuttles its symbiotic bacteria to optimal energy sources in the upper oxygen-rich and the lower oxygen-de­pleted coastal sediments. In exchange, the microbes provide their worm host with fixed carbon and all the amino acids and vitamins it needs Source