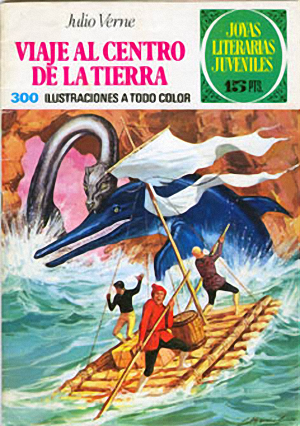 Among Jules Verne's famous works is Journey to the Cen­ter of the Earth. Have you read the book or seen one of the movie versions? If so, you will remember that when the fearless explorers descended into the depths of a volcano, they encountered prehistoric life forms such as plesiosaurs. It turns out that Verne wasn't far off. When we descend into the Earth's depths, we may not find gigantic living forms, but we do encounter microbes aplenty. In addition, volcanoes have a lot to do with this story. The deep ocean has "ridges" where new crust is being made. Here, volcanoes are constantly spewing forth molten rock that cools rapidly upon contact with sea water, forming "basaltic pillows." Because these structures cool rapidly, they become surrounded by a layer of crystalline basalt. These rocks are rich in reduced minerals, a possible source of energy for chemolitho­troph­ic microbes. Such metabolic activities can be verified in the lab, but how to measure this activity deep in the oceans? Keep in mind the prob­lems of working at depths of 5000 meters and at pressures 600 times greater than those at sea level. 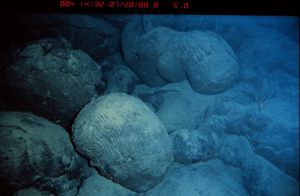 Sure enough, we can only study such matters indirectly. A report recently published in Nature claims that the ba­saltic rocks of the ocean ridges contain an abundance of microbes. The researchers combined three techniques: quantitative PCR, microscopy, and in situ nucleic acid hy­bridization. Guess what, these rocks contain 1,000 to 10,000 times more microbes than the surrounding wa­ters. Not only that, their biodiversity is quite unique. In deep waters near the sea bottom, there are between 8 x 103 and 9 x 104 microbes/ml, half of them bacteria, half archaea. In contrast, in the sediments the numbers are between 3 x 106 and 1 x 109 per gram of rock. More than 90% are bacteria, most γ-proteobacteria. 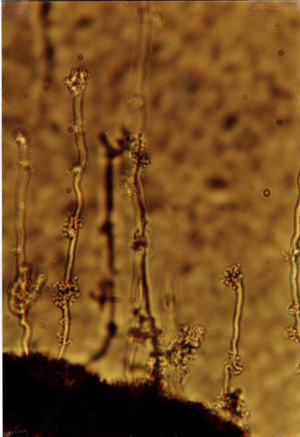 Tubes in the crystalline surface layer of a basaltic pillow. The holes are thought to be made by chemolithotrophic microbes that “eat” the crystal. Source

Is this a lot or little? Depends on your frame of reference. In agricultural soils, the number of bacteria is higher than 107 per gram. Thus, sea bottom basalt is perhaps not a bacterial garden of Eden, but it is far from a barren and inhospitable site.

What do these organisms eat? Good question, with no good answer as yet. It is believed that at the base of the trophic pyramid (read "food chain") are chemo­lithotrophs or mixotrophs that oxidize the sulfur, iron, and manganese present in the basaltic crystals. This has been shown experimentally in the lab, but in nature…? Let's face it, it hasn't been shown there yet. No matter. These intraterrestrial organisms impact the biogeoche­mical cycles, being responsible for the fixation of as much as 500,000 tons of carbon a year.

Not bad for organisms that we didn't even know existed until recently. 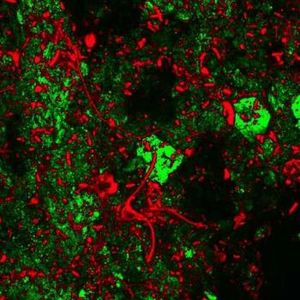 Fluorescence microscopy of a sample of endolithic bacteria. Green is fluorescence of the rock, red of bacteria. Source