« The View From Here by John Coffin | Main | Fine Reading: A Quick Guide to the Bacterial Flagellar Motor »

News from the Department of Mimivirology: Part II

New and tantalizing facts continue to emerge from those on the frontlines studying the giant viruses. A recent paper by La Scola et al. reports the discovery of a novel virus found in amoebas that requires mimivirus for replication. This defective virus has been called Sputnik (for fellow traveler). This exciting finding expands even further the frontiers of virology. 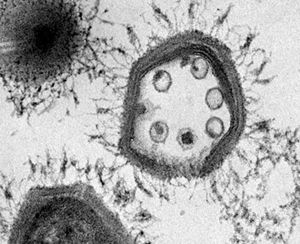 Such news elicits spirited debate and thoughtful com­men­tary in the blogosphere, such as here and here. We asked two virologists for comment, one from the per­spective of the adeno-associated viruses, the other from the world of phages.

La Scola et al. consider Sputnik a novel phenomenon and wish to term it a virophage because, in order to replicate, it requires co-infection with the virus APMV4 and because its own replication inhibits that of its helper. Indeed, this is identical to the behavior of adeno-associated viruses (AAV). They, too, require co-infection with a helper virus – either an adeno- or a herpesvirus – for productive infection. If the co-infection is simultaneous, adenovirus replication can be severely inhibited. Also, several herpes helpers are inhibited by AAV replication. Thus, Sputnik is not a novel biological phenomenon, but a nice example of an archaeal virus whose behavior is similar to a well-characterized human virus.

Ken Berns directs the Genetics Institute at the University of Florida. He is past president of the ASM and an authority on adeno-associated viruses.

Satellite (or helper-dependent) coliphage P4 depends upon helper phage P2 capsid, tail and lysis proteins. P4 makes a phage particle with a P2 tail and a smaller, modified P2 capsid, appropriate for the size of P4 DNA. P4 inhibits the growth of its P2 helper. Thus, although their statement* is incorrect, the finding of the Sputnik phage is certainly interesting.

*From the paper by La Scola et al.: To our knowledge, this observation of a virus using the viral factory of another virus to propagate at the expense of its viral host has not been described previously.

Richard Calendar is Professor of Biochemistry and Molecular Biology at the University of California at Berkeley and the editor of the widely acclaimed book, The Bacteriophages. For his review covering the strategies of satellite phage P4, click here.

It surprises me (but probably shouldn't) that neither the referees nor the editor caught the "has not been described previously" faux pas. Excellent comments by Ken and Rich.