« Intraterrestrials | Main | How Many Genomes Does It Take to Change a Light Bulb? » 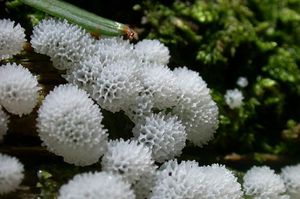 Phage-hunter Tim Sampson of Blogging for Bacterio­phages has a mind-boggling calculation about how far the phages of this planet would stretch if laid end to end. Plus a phage ballad.

Seen through the eyes of J. A. Ginsburg armed with 10x lens, lichens get their time of day at Germtales (blog in­active as of 2014).

Slime molds also get their attention in an erudite essay in Christopher Taylor’s Catalogue of Organisms.

Kathie Hodge reports in the Cornell Mushroom Blog that she and others were on NPR Science Friday on September 12, 2008, in a program entitled Fungi: The Good, The Bad, And The Edible.

A. J. Cann’s MicrobiologyBytes is always there to provide incisive analyses of late-breaking microbiological news.

And microbiological news with a personal touch abounds in Tara Smith’s Aetiology.