Where Art Thou, O Nucleoid?

In a post on May 12, Elio asked where ribosomes are located in bacterial cells. According to a 2006 paper by Ortiz et al., "the ribosomes are evenly distributed throughout the cytosol" and "no dis­tinct nucleoid territory was observed." This prompts one to also ask: Where art thou, o nucleoid? Do their observations indeed indicate that, in the small cells of Spiroplasma melliferum (Figure E; volume ~0.02 µm3), the ribosomes (number ~1000) and DNA (genome size 1.46 Mbp) co-mingle and that a phase separation between cytoplasm and nucleoid is absent? 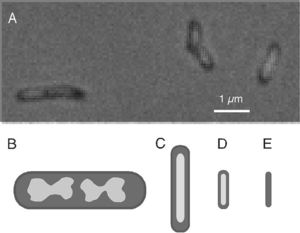 In larger, fast-growing E. coli cells (Figure B; volume 1-3 µm3), the nucleoid is clearly visible in living cells as a low-density compartment, as was already documented by Mason and Powelson in 1956. However, distinct nucle­oids are difficult to see in smaller, slow-growing E. coli cells. In the small Caulobacter, nucleoids have even been reported to be absent (R.B. Jensen, 2006). The existence of a discrete DNA phase was calculated by Odijk (1998), taking into account the excluded volume interactions between DNA and the soluble proteins as present in small E. coli cells (Figure A; volume 0.46 µm3; genome size 4.6 Mbp). To me it seems unlikely that the physical laws that predict the visible phase separation in the larger cells would not hold for the smaller cells as well.

Electron microscopy of thin sections of small E. coli or Caulobacter cells fixed with osmium tetroxide indeed shows a clear phase separation between nucleoid and cytoplasm. An artifact? Maybe, since the same cells fixed with glutaraldehyde show no such phase separation. It is therefore highly relevant that ribosome-free regions with a different texture can be seen in vitrified sections of Deinococcus radiodurans (Eltsov & Dubochet, 2005) and in cryoelectron tomograms of Bdellovibrio bacteriovorus (Figure D; cell volume ~0.08 µm3; genome size 3.78 Mbp; Borgnia et al., 2008). These two techniques are thought to be less prone to artifacts, but this does not mean that artifacts are not possible. For instance, it has been noted (Bayer, 1991) that cryo­fixation does not preserve the adhesion sites between inner and outer membrane of plasmolyzed E. coli cells as obtained after aldehyde fixation.

Could the absence of the nucleoid in some vitrified samples, such as those shown in Ortiz's paper, be ascribed to the complex process of freezing? Bacterial DNA is present in the cell in the form of a stiff, branched supercoil that, upon osmotic shock, "explodes" like a spring out of a spheroplast. In the intact cell this supercoil is compacted by excluded volume interactions with the abundant cytoplasmic proteins. So, what happens during freezing, a process that of necessity must begin in the extracellular space? Could there be a stage in the process when the motion of the proteins has been slowed, but the DNA could still "spring"? Might this allow them to mix?

Moselio Schaechter on October 13, 2008 at 09:57 AM in Methodology, Physiology & Genetics, Teachers Corner | Permalink