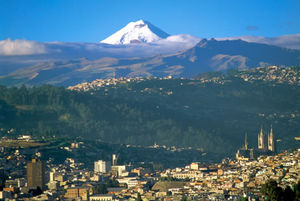 Quito and the volcano Cotopaxi. Source

Every two years, the Latin American Microbiology Con­gress convenes, each time hosted by a different country. I was invited to participate in this year's gathering held in Quito, Ecuador. Having spent my youth there as a re­fu­gee during World War II, I have a special affinity for that beautiful city and welcomed the opportunity to re-visit it. I was one of some 500 attendees from about 20 count­ries, including some in Europe and North America. A working attendee, I gave two talks at the meeting and one at Quito's Catholic University, one of the top schools in the country. Participation was particularly satisfying because this meeting was exceedingly well-run, as were the social events.

In many of the presentations, the discussion centered around the identification of pathogens found in different geographical locations in Latin America. Often the researchers made use of modern molecular techniques that permit the identification not only of specific strains, but also of particular genes encoding virulence factors. Such studies have time-honored epidemiological value and are essential in efforts to combat the diseases. It buoyed me to learn that such ad­vanced work is being carried out in quite a few countries of the region.

From a mechanistic point of view, such epidemiological correlations are but one arm of the quest for understanding microbial and host factors involved in a disease. The other is to make mutants and to test them in an animal model. This approach has a mighty big obstacle, namely that animal models often bear little resemblance to the human disease. People aren't mice. This problem has plagued investigators from the beginning and continues to this day. Although plenty of good thought and huge efforts have been devoted to this, and great accomplishments have been achieved, it is fair to say that success with animal models has been uneven.

The age-old epidemiological alternative sometimes al­lows one to correlate disease manifestations with a given property of pathogenic strains. The classical examples are of toxin production, where strains that make toxins can be shown to cause disease, and related ones that don't are harmless. This type of finding fulfills the first of Falkow’s Molecular Koch's Postulates:"The phenotype or property under investigation should be associated with pathogenic members of a genus or pathogenic strains of a species." Although such an epidemiological approach is limited to “experiments of nature,” it has given us power­ful answers for at least a hundred years.

So, to turn back to what I heard in Quito, here is an interesting example of a well-executed epi­demiological study that led to an interesting discovery. It is known that in the developing countries there is a high incidence of Helicobacter pylori infection. In fact, in the highlands of Ecuador, H. pylori infection is extremely high, and H. pylori-associated gastric carcinoma has the highest in­cidence rate of any cancer there. It has also been known that many people in that area suffer from zinc deficiency. Could there be a link between zinc deficiency and H. pylori disease? A group of Ecuadorian investigators (including my friends Fernando Sempertegui, Myriam Diaz, and Oswaldo Rodriguez), in collaboration with North American colleagues, took stomach biopsies from 352 pa­tients and found that low zinc content in the mucosa correlates strongly with increased severity of the gastritis and of H. pylori infection. This suggests that supplying zinc to people may be a good idea, a possibility being followed up there and elsewhere. Without the careful epidemiological work, who would have guessed?