by Merry and Elio

Organelles were endosymbionts that either made good or were enslaved, depending on your point of view. Either way, some of their genes now reside in the nuclear genome of their eukaryo­te host. We also know that there are some bacterial endosymbionts living today within multicellu­lar eukaryotes. Can their genes also make such a jump to their host genome? And if so, what then? 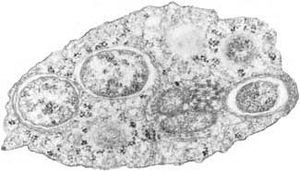 Transmission electron micrograph of Wol­bachia within an insect cell. Source

The first evidence for such a transfer was reported in 2002. The participating endosymbiont was Wolbachia pipientis. Wolbachia are among the most avid profes­sional endosymbionts, found in more than 20% of all known insect species (and in other groups as well, such as nematodes.) They're notorious for their blatantly sexist tactics. Since they are maternally inherited – like organelles – their preferred habitat is the cytoplasm of female reproductive tissues of their insect hosts. From there, they manipulate host reproductive biology to in­sure their own survival, basically by favoring in several ways the population of infected females. That location also gives them a leg up for lateral gene transfer (LGT) to the germ line of their host. Furthermore, although their genome is highly stream­lined, it still contains a surprising number of mobile DNA elements (that is, insertion sequences and retrotransposons) that might increase their chances for LGT.

In that first report, a Wolbachia genomic fragment was found in the X chromosome of its insect host, the adzuki bean beetle (Callosobruchus chinensis). Later work demonstrated that 360 Wol­bachia genes – about 30% of the genome – had been transferred to the beetle's nucleus. A second instance was reported in 2006, this time involving a Wolbachia endosymbiont of a nematode, the human-parasite Onchocerca volvulus. These nematode endosymbionts also reside in the repro­duc­tive tissues of their hosts where they are essential for host reproduction. (See our earlier post about the role of this Wolbachia pathogen in river blindness.) 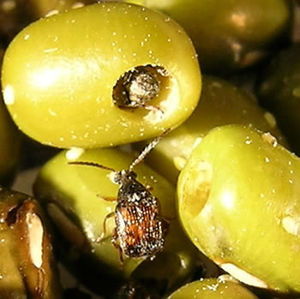 The versatile adzuki bean beetle at work on a mung bean. Source

Last year, another research group chimed in with their findings of Wolbachia genes in fruit flies, wasps, and ne­matodes. In the tropical fruit fly, Drosophila ananassae, virtually the entire Wolbachia genome had been trans­ferred. Using PCR, they demonstrated that 44 of 45 Wol­bachia test genes were present in the fly DNA. With fluorescence in situ hybridization (FISH) using probes for two Wolbachia genes, they located the insert on the fly's autosomal 2L chromosome. Breeding experiments con­firmed that the insert was inherited as a well-mannered Mendelian autosomal trait, not maternally as are the endosymbionts.

It is one thing for a genome fragment from an endo­sym­biont to be incorporated into the nuclear genome of its host, quite another for it to be transcribed, translated, and used by that host. What is the fate of those hundreds of transferred genes? Few were found to be transcribed in either the adzuki bean beetle or the tropical fruit fly. In the beetle, most had been degraded to pseudogenes, but low levels of transcription were detected for a few. In the fly, about 2% of the 1206 transferred genes are transcribed. The 5' end of the transcript from one of those genes has a 5' mRNA cap – an im­portant step in the maturation of mRNA in eukaryotes. But there wasn't much of that transcript made, perhaps a million times less than for the actin gene. The odds are small, the hurdles high. Still, at this point, the possibility that transcripts of some of those genes function in some host tissues cannot be ruled out. (For a recent review of the role of LGT in eukaryote evolution, click here.)

So, what's going on? Why are so many genes transferred, with so little obvious purpose? Are the Wolbachia squirreling away their genes for safekeeping, or is there some other reason for their massive transfer to the host's nucleus? A mystery. Whether they function in their new location or not, these transferred genes serve to remind us yet once again that genes are mobile, genomes dynamic. Given the huge numbers of cells and organisms, even very low probability events can – and do – happen, creating new evolutionary possibilities.

The D. ananassae researchers argue that although the reported transfers so far are few, they are not to be dismissed as mere novelties. We quote: