« The Teachers’ Corner | Main | Fine Reading: The Origins of Multicellularity »

The More the Merrier

Something there is that likes to mull over symbioses. Indeed, what is more enjoyable to contem­plate than the relationship between two organisms? The answer? One that involves three, or four, or even more. Not that this is unusual, just that it's always exciting. Here are two examples. 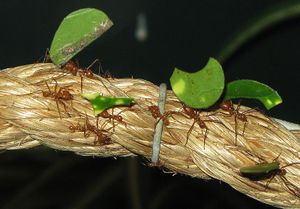 Certain insects, notably leaf-cutting ants, live off a fungus that they cultivate in house on masticated and triturated plant material they bring into their nest. They have a problem, to wit, unwanted fungi can also grow on this fertile soil. How to make sure that only the desired crop, and not weeds, grows?

The answer – the same as more recently devised by hu­man farmers – is to use a chemical weed-killer (but a natural fungicide, phew!). Such a compound is made by another partner in the deal, an actinomycete that the ants carry in abundance on their back. This partnership has been fine-tuned over millennia; the fungicide is highly specific for the number one crop pest, the parasitic microfungus Escovopsis. Recently, yet another player was added to the roster, a black yeast that is an antagonist to the actinomycete. The yeast thus reduces the amount of fungicide produced, to the detriment of the ant colony. Let's see, is that four players, or five?

Now along comes another story from the lab of Cameron Currie, the discoverer of the leaf cutter ant multi-actor troupe. Some beetles, for example, the Southern pine beetle, tunnel through the bark of trees, eventually girdling and killing them. Their larvae subsist on a fungus, Entomocorticium spp., whose presence is ensured by the parent. Adult beetles carry this fungus in a specialized sac called a mycetangium, ready at hand for inoculating into the bark.

Just as in the case of the ants, there is a competing fungus, Ophiostoma minus, that can outgrow the desirable one. Again, an actinomycete comes to the rescue by making an anti-Ophiostoma antibiotic. This antifungal, called Mycangimycin, is a novel 20-carbon carboxylic acid with lots of double bonds and a five-membered endoperoxide ring.

The structure of mycangimycin, a seven-conjugated double bond chain and a five-membered endoperoxide ring. Source

One would guess that insects who have close relation­ships with fungi (and which don't?) are being "mined" by drug-seekers for new, and perhaps specific, antifungal antibiotics. It would be nice if basic studies of symbiosis led to such practical discoveries.

Another interesting paper from the Currie lab. But there's still a big mystery about the fungicide-producing actinomycetes. Mutants that knock out fungicide production must occur all the time. Producing fungicide has a metabolic cost. So why don't nonproducing mutants outcompete fungicide producers on each individual ant? Sure, in the long run, spread of this mutant could hurt all the actinomycetes, as the ant colony collapses, but natural selection has no foresight. See link for a possible answer.