The User's Guide to Poly-γ-Glutamates

Poly-γ-glutamate. The number of mono­mers may be 1000 or more. Source

We all carry a box in our head where we deposit intri­guing facts that don't seem to connect to anything else. Sooner or later, such cached bits of information emerge and find their place in the scheme of things, just like wandering souls in Purgatory that finally ascend to Heaven. Some do it with a bang.

I have in mind the poly-γ-glutamate capsules of some Gram-positive bacteria. I believe I must have first heard of them as a student, long ago. These particular capsules used to be considered an oddity because respectable, God-fearing ones are made up of polysaccharides, not amino acid polymers. But, it turns out ­ mea culpa – that these compounds are far more than a curiosity. For a re­view, click here.

These odd polymers do plenty. 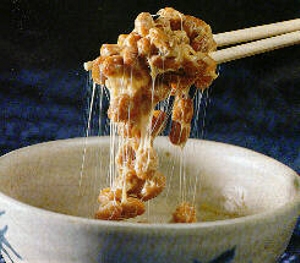 High on their list of talents, capsules made of poly-γ-glu­tamate are virulence factors. In Bacillus anthracis, among others, they help protect the bacteria from being phago­cytosed, thus are required for pathogenicity. Some soil bacteria don't use these polymers to make capsules, but instead release them to their environment, probably to sequester toxic metals. Some halophilic archaea use them to lower the local salt concentration. And, for the culinarily savvy, poly-γ-glutamate is the main ingredient of the goo in natto, the pungent fermented beans dish prized by many (but not all) Japanese.

Poly-γ-glutamates are also found in eukaryotic organisms, where they also matter. It has been known for some time that nematocysts, the stinging apparatuses of jellyfish and other Cnidarians, are full of poly-γ-glutamates. These nema­tocysts, armed with barbs and toxins, are explosively ejected to capture prey and for defense. Large amounts of poly-γ-glutamates, as high as 2 mmol/g tissue, help raise the osmotic pressure to as much as 150 bar, thus giving the oomph to the explosive discharge. 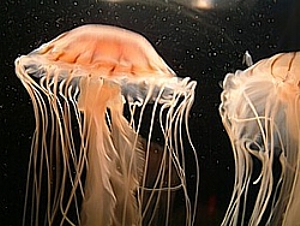 What ties bacteria and jellyfish together is that a bacterial gene for making poly-γ-glutamate has found its way into the jellyfish! This might well be another example of the rare horizontal gene transfer between prokaryotes and multicellular eu­karyotes. Such transfers are frequent in prokaryotes and play important roles in unicellular eu­kar­yotes, but only a few instances are known in meta­zoans. Another instance seems to have occurred in root knot nematodes (Meloidogyne spp.), although the role of poly-γ-glutamates in these organisms is not yet known.

You’ll agree, it sometimes pays to rummage inside that box of quasi-trivia in your brain. Might not be so trivial, after all.

Moselio Schaechter on November 24, 2008 at 09:28 AM in Evolution, Physiology & Genetics, Teachers Corner | Permalink