Figure 1. True color satellite image of a mil­ky E. huxleyi bloom in the English Channel, south of Plymouth, UK, on 30 July 1999. This bloom was effectively ‘dead’ and up to 1 million E. huxleyi-spe­cific coccolithoviruses per teaspoon of water were found in the middle of the high-reflectance water. Courtesy of the Plymouth Marine Laboratory Remote Sen­sing Group

The Red Queen’s race in Lewis Carroll's Alice in Wonder­land is a common metaphor for an evolutionary arms race. A good example can be seen in predator-prey dy–namics, particularly virus-host interactions where hosts must rapidly evolve immunity to infection for survival of the species. It takes all the running you can do to stay in the same place.

Red Queen dynamics can also help explain the bloom-bust cycles of oceanic algae that can be seen readily from space in satellite images. One such alga is Emiliania hux­leyi, a 5 µm diameter eukaryotic cell that has an elabo­rate armory of calcareous coccoliths. It is ubiquitous in the world's oceans and forms dense milky blooms that cover vast areas of mainly temperate oceans. Until re­cently, the mechanisms of E. huxleyi bloom disinte­gra­tion were poorly understood, but it is now accepted that viruses (referred to as coccolithoviruses) are intrinsically linked to these sudden crashes.

A recent report describes a novel sex strategy that E. huxleyi has adopted to avoid coccolithovirus infection. The team thinks the solution is so incredible they have dubbed it the 'Cheshire Cat' es­cape strategy, after the disappearing antics of another famous character in Lewis Carroll's book. The microalga responds to coccolithovirus attack by switching from its usual diploid life stage (where it is susceptible to infection) to a haploid cell, essentially changing its physical appearance, making it impenetrable to the deadly coccolithovirus. As diploids, E. huxleyi are non-motile coc­colith-bearing cells, perhaps ironic given some early thinking that coccoliths actually played an antiviral role. The motile flagellated haploid cells lose their chalk armory and are instead covered by organic scales which may be the mechanism of resistance by acting as a physical barrier. 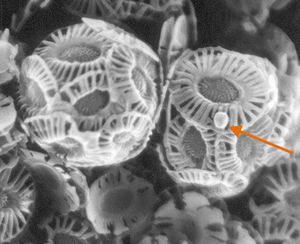 It is a clever antiviral strategy and will create a reservoir of resistant haploid cells that can have sex and possibly create a huge variety of new E. huxleyi genotypes. Even­tually, some of the fitter genotypes will succeed in gene­rating new blooms when the environmental conditions are favorable. This constantly changing genetic landscape in response to coccolithovirus infection will be critical in buffering the effects of rapid climate change, such mi­croorganisms will be the first to react and adapt to a changing ocean. Selection for sexual reproduction as an antiviral mechanism will also maintain a high diversity ensuring that there will always be a genetic variant that can adapt to a particular environmental condition. 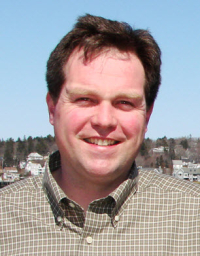 Willie Wilson is Senior Research Scientist at Bigelow Laboratory for Ocean Sciences, West Boothbay Harbor, Maine. An authority on marine viruses, he is an author of numerous reports in this field, including this one, this one, and this one.

n_n
thank you!!
by the way, I do like your article very much. It is very interesting!
Tatiana E. Jeffrey