The Secrets of the Sacculus 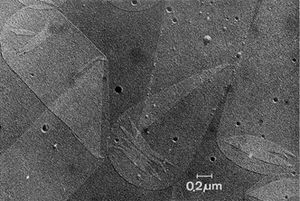 In my retirement, one topic that continues to interest me is the 3D-structure of murein (i.e., peptidogylcan, as is now generally preferred in the literature). I participated in the isolation and description of the "murein sacculus," the "little sac" of E. coli B, under the directorship of Wolf­hard Weidel in Tübingen, Germany, in the late 1950's and early 60's. An old review (Bag-shaped Macromolecules: A New Outlook on Bacterial Cell Walls) presented the con­cept that the bacterial exoskeleton is "a rigid bag of the shape and volume of the cell" in the form of "one enor­mous macromolecule kept together by covalent bonds throughout." The authors included a simple hypothetical model for the structure of the sacculus.

During the past 40 years, a considerable number of increasingly sophisticated and ingenious studies of 3D-peptidoglycan structure have been presented and different models have been pro­posed. Regular or irregular, parallel or perpendicular orientation of peptidoglycan strands to the cell surface were considered. (For three more recent papers, click here, here, and here.) But in­variably, the authors have accepted that this is "one of the most important, yet still unsolved, structural problems in biochemistry." They concluded that "there is a shortage of methods by which to determine precisely, by direct structural analysis, the tertiary structure of peptidoglycan." However, very recently Grant Jensen and co-workers at Caltech reported an important advance in visualizing structural details in peptidoglycan from Gram-negative bacteria. 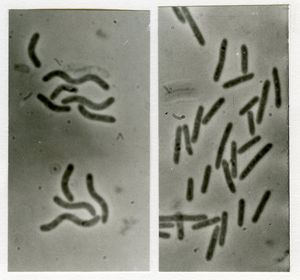 By the application of a powerful new technique, electron cryotomography, the authors obtained the first images of glycan chains, the backbones of peptidoglycan. An orien­tation of these chains, perpendicular to the long axis of the cell and running like hoops around the circumference of the sacculus, was observed.

More information on the long range order and organiza­tion of the peptidoglycan network in the cell walls of dif­ferent bacteria will now be eagerly awaited. One require­ment for such studies will be the preparation of pure peptidoglycans. In cell walls of E. coli, the peptidoglycan sacculus contributes less than 20% to its total weight. It has to be liberated from the tough outer membrane (proteins and lipopolysaccaride) and the covalently bound lipoprotein. In cell walls of Staphylococcus aureus and other Gram-positive bacteria, pep­tidoglycan forms a thick, three-dimensional meshwork studded with covalent appendages. It seems promising to look for homogeneously thin peptidoglycan layers of "simple" composition, easy to isolate in high purity. 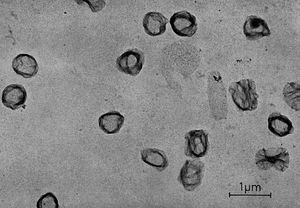 Figure 3. The same sacculi as above (Fig. 1) after treatment with divalent uranyl cations, showing their anisotropic (uni-lateral) contraction from tubes to "fat" rings

More than 40 years ago in Tübingen, my colleague Her­mann Frank, an electron microscopist, and I found such naked peptidoglycan in the cell wall/envelope of Spirillum (now Aquaspirillum) serpens. At that time, we ran into an electron microscopic image of perfectly ordered subunits on the surface of Spirillum serpens in a publication by Houwink. We wondered whether this was perhaps the image of the expected regular order of the sacculus. Houwinck kindly sent us his strain of Sp. serpens and we subjected it to the E. coli sacculus isolation procedure. It soon became clear that Houwink's regular surface pat­tern was disintegrated by the detergent treatment. This pattern was due to what is now widely known as the S-layer on the surface of many bacteria. Further mild, non-hydrolytic and non-enzymatic treatment of the Sp. serpens envelopes produced beautiful peptidoglycan tubes with a chemical composition very similar to that of the laboriously purified E. coli sacculi, and without any apparent covalent appendages. During the isolation procedure, cell contents were extruded from the walls and sacculi by controlled shaking with glass beads. There­by, part of the sacculi were sliced open and single sheets of peptidoglycyan were flattened out. These should be even more suitable for structure studies than the two sheets which are inevitably stacked on top of each other in an empty, but intact, collapsed sacculus. 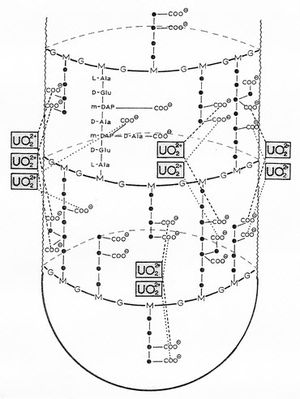 Aquaspirillum serpens is a harmless, saprophytic, aerobic bacterium, obtainable from the culture collections, easy to grow in simple broth. Moreover, when aquaspirilla are maintained for some time on agar slants and then spread on agar plates, two kinds of colonies emerge. One is smooth, with spiral cells, the other rough, with rod-shaped cells. Apparently, on solid medium some aqua­spirilla change from the usual spiral to a rod cell shape. The spiral shape may be dispensable when the cells do not need to move towards oxygen. Thus, one can study spiral- and rod-shaped peptidoglycan side by side.

Our attempts to observe peptidoglycan fine structure in these sacculi by the conventional transmission electron microscopy then available were unsuccessful. It became clear that the problem was lack of electron scattering by the exclusively light atoms in the peptidoglycan, and also rapid destruction of the sample by the strong electron beam. Attempts to enhance contrast of peptidoglycan sacculi by staining with uranyl and some other heavy me­tal ions brought unexpected results. (For the abstract of one paper, click here, and for another paper in German, click here.) Within a few minutes, the sacculi stained with uranyl2+ and chromi­um3+ had shrunk, mostly lengthwise, ending up looking like automobile tires. With thallium1+, the sacculi were stained but did not shrink. This anisotropic behaviour led to the naïve, hypothetical model shown in the figure. A regular orientation of a monolayered peptidoglycan structure was assumed, with glycan chains (disregarding the variability of chain lengths) running perpendicular to the long axis and surrounding the tubular sacculus like hoops. The observed anisotropic shrinking of the sacculi was thought to result from interaction of uranyl-ions with free carboxyl-groups located in the contractible, crosslinking peptide side chains.

Some of these early hypothetical ideas are in surprising agreement with the recent results and conclusions of Jensen et al. Thus, sacculi from Aquaspirillum serpens may really be useful for studies of peptidoglyan structure. It will be most interesting to see what further surprises await the examination of this fascinating biopolymer. 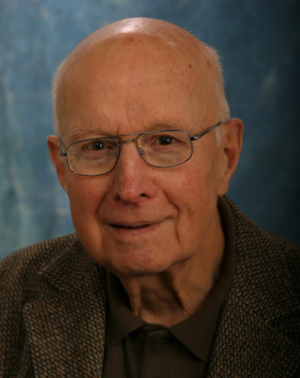 Hans Martin is professor emeritus, Technical University Darmstadt, Germany, and an emeritus member of the ASM.