« Preventing Infections by Dispelling Sphignorance | Main | Giardia: "I Did It My Way" » 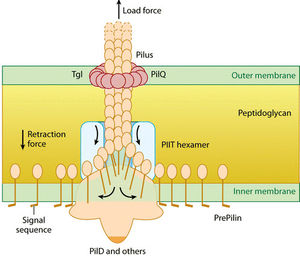 Schematic of the type IV pilus machine omitting 7 of the pilin proteins "for the sake of clarity." Source

Microbiologists have been fascinated by the social swarm­ing of the myxobacteria since they were first isolated by Roland Thaxter in 1892. Traveling in "wolf packs," these bacteria glide along solid surfaces, such as agar. En masse they secrete enough extracellular en­zymes to lyse and digest bacteria, the potential prey they meet on the way. A great deal is now known about how the individual cells in the swarm move about. In a recent review, Dale Kaiser covers the topic from one end to the other – in both genetic and molecular detail. But don't let the pages of details deter you. Even if you skim them, you will still enjoy the unfolding story.

In short, Myxococcus xanthus "glides" using two engines, one at each pole of the cell.

At the leading pole is a type IV pilus engine that pulls the cell forward; extrusion of slime through nozzles at the trailing pole is thought to push. Both engines are complex, each assembled into elaborate structures from about 20 different proteins. The two engines work so well together that the cells zip along at a speed that is faster than the sum of the speeds measured for single-engine mutants. 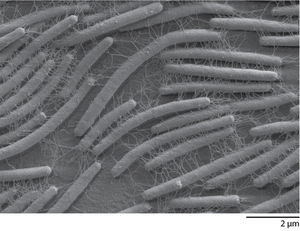 The cells can produce pili at either end, but they do so only at the leading pole. When the extended pili attach to a cluster of M. xanthus cells, the pili retract, pulling the individual cell forward towards the more-firmly-anchored cluster. Thus, the cells have to be less than a pilus length apart for this to work. The tips of the pili don't attach to just any target, but only to specific extra-cellular polysac­cha­ride fibrils produced by these bacteria.

Now the push. Early observations of the slime trails visible on agar plates led to the suggestion that these bacteria might be given a push by secreting slime. In­deed, there are reasons to think this rocket engine mechanism is plausible. Transmission electron micrographs of the trailing pole of the cell show more than a hundred pores in the outer mem­brane, called nozzles, from which narrow, amorphous polysaccharide filaments are extruded. These fine filaments fuse laterally to form the bright ribbon of trailing slime visible by phase-con­trast microscopy. The other pole of the cell has its set of nozzles, too, but they are inactive.

stained isolated cell envelope of M. xanthus showing the nozzle array at one of the cell poles. Source (dead link in 2014)

Myxobacteria can divide and glide at the same time. When the division septum forms, one daughter cell inherits the active pilus engine from its mother and assembles an active slime engine at its newly formed pole. Likewise, the other daughter cell inherits the active slime engine and assembles a new pilus engine. As the result, each daughter cell keeps moving in the same direction as the parent, without missing a beat. There is yet another feat: approximately every 7 minutes, the cells reverse their gliding direction. The leading pole that had been producing pili now extrudes slime, and vice versa. It takes only a minute or so for the appropriate engines to be turned off and on.

If you ever find yourself trying to convince a skeptic that bacteria are dexterous and complex, you might hand them a copy of this review.