« Fine Reading: The Hybrid Two-Engine System of Myxobacteria | Main | What Microbiological Discovery in 2008 Did You Find Especially Interesting? » 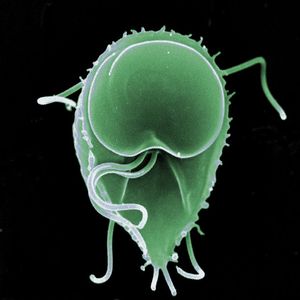 Giardia lamblia trophozoite. This is the motile, feeding stage of the parasite found in the intestine of humans and other mammals. Scanning electron micrograph, false color. Credit: Joel Mancuso, Univ. of CA, Berkeley

Even if Giardia lamblia weren't one of the most common human parasites, it would still garner its share of atten­tion. It is one of the earliest diverging eukaryotes, and it has its own way of doing things. For starters, it has two apparently equivalent diploid nuclei, both of which are transcriptionally active. (Why does this matter? Find out below.) Its genome is exceptionally compact, with unusu­ally short intergenic regions and only a handful of pos­sible introns. Where other eukaryotes use multi-domain proteins, Giardia gets by with simpler versions. In com­mon with many parasites, it does without numerous me­tabolic pathways, relying on a supply of product from its mammalian hosts. It also does without functional mito­chondria, making do with mitosomes – mitochondrial re­licts that lack a genome but carry out the mitochondrial function of assembling iron-sulfur protein clusters.

During its motile feeding or trophozoite stage, it lives and reproduces in the small intestine of humans and other mammals. It attaches to the intestinal wall by its unique adhesive ventral disc. No receptor sites are involved – it also attaches to the wall of the container when grown in cul­ture. In the small intestine, it has to defend itself not only against the immune system of the host but also against digestion by the abundant proteases and bile. As defense against both, it cloaks its surface with a dense, 18 nm thick layer of protein, even coating its four pairs of flagella. 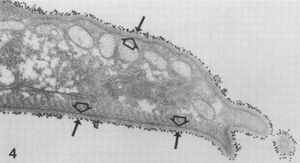 Immunoelectron microscopy using a monoclonal antibody specific to the VSP. Long arrows point to the VSP covering the entire surface of the trophozoite including the flagella. The open short arrow indicates the plasma membrane. Source

All of the surface protein molecules on any individual trophozoite are identical, but the protein that is actually expressed varies from strain to strain, from isolate to isolate, and even within a clone over time. Thus, these proteins are called variant-specific surface proteins (VSPs). Each trophozoite has a repertoire of 235–275 unique, but related, VSP genes. This is about 4% of their protein coding genes – a significant investment. Since this collection of genes varies from isolate to isolate, a host may encounter even more than 275 different VSPs in the course of its lifetime. (For an excellent review, click here.)

The VSPs themselves have some intriguing properties. They range in size from 200 to 2000 amino acids, with a highly conserved carboxyl terminus that spans the cell membrane and protrudes into the cytosol. The variable amino terminus is exposed on the cell surface and is the site of antibody binding. These proteins have 11–12% cysteine resi­dues, most of which are linked via disulfide bonds. Thus they are highly resistant to intestinal pro­teases. Some other parasitic protozoa – such as the trypanosomes and plasmodia – also make cysteine-rich surface proteins. However, only Giardia makes surface proteins that also contain a zinc finger domain – a puzzling finding since such domains are typically associated with DNA-binding. But again, the Giardia do it their way. 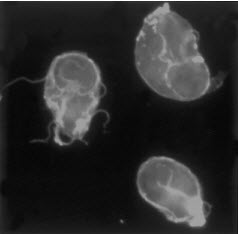 Indirect immunofluorescence showing the entire surface of the trophozoite covered by a particular VSP (VSPH7). Source

Trophozoites make only one of the variant VSPs at a time. They spontaneously switch to making a different VSP every 6.5–13.5 generations. With this rate of switch­ing, even a small clone will include individuals expressing different VSPs. The relative success of each clone during an infection depends not only on the host immune re­sponse, but also on their differing abilities to cope with the intestinal proteases and other host factors.

This strategy of switching one's surface antigens, termed antigenic variation, is used by numerous eukaryotic, bac­terial, and viral pathogens. The mechanism used to gene­rate antigenic diversity varies, but often involves genetic rearrangement. (In an earlier post, we described one of the viral mechanisms.) Like Giardia, trypanosomes also cover their surface with a single protein that is highly va­riable. The genes for their surface proteins – numbering over a thousand – are clustered at the telomeres. Over 90% of them are pseudogenes that frequently recombine with the intact genes, thus generating great diversity. They transcribe only one gene at a time.

Giardia does it differently. Giardial VSP genes are found scattered over all of its chromosomes and show no evidence of rearrangement or sequence alteration. Switching proteins at the level of transcription like the trypanosomes do would be tricky for Giardia because it has two transcriptio­nally active nuclei. Both would have to switch simultaneously. In a recent paper, researchers in Argentina used nuclear run-on experiments to demonstrate that a trophozoite transcribes many – and possibly all – of its VSP genes. Nevertheless, only one protein accumulates. This suggested that Giardia might use RNA interference (RNAi) to prevent translation of the messenger RNAs for the other VSPs. RNAi is a complex post-transcriptional mechanism used by eukaryotes to regulate the expression of genes by destroying their messenger RNAs. To target a specific messenger RNA, its complementary (antisense) strand is synthesized. Then the resultant double-stranded RNA is diced into short lengths.

The researchers demonstrated, step-by-step, that Giardia trophozoites indeed use RNAi to silence all the VSP genes except one – the one that is used to produce its current surface protein. The trophozoites make anti-sense messenger RNAs for the silenced VSP genes, thus leading to their destruction. When their RNAi processing machinery is experimentally disabled, the trophozoites can not regulate expression of their VSP genes as usual. They then express more than one VSP on their surface. What triggers the switching and/or determines which of the VSP messenger RNAs is not destroyed? Both are mysteries at this point.

Natural infection with Giardia does not confer immunity, presumably because Giardia evades the host's immune response by switching to a different surface protein. If the host had antibodies against all 200-plus VSPs, then Giardia's tactic might not work. There may now be a way to try that. Giardia that lack a functional RNAi system can be cultured in the lab and they express most – and likely all – of their VSP proteins on their surface. Thus, they come with a complete set of surface antigens that makes them ideally suited for use as a vaccine. In a preliminary unpublished report, the same researchers stated that innoculation of gerbils (a model system for giardiasis) with these RNAi-less Giardia afforded complete protection from infection. We can hope humans do as well.