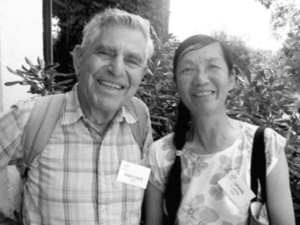 Picture a leading authority on algal genetics and ecology, a discoverer of fascinating microbes from many phyla, an ac­complished poet, an Esperantist who translated Winnie the Pooh into that language, a wit, a philosopher, and a nice guy. You have pictured Ralph Lewin, who died in La Jolla, California, in late November. He was one of the last roman­tic polymaths of science.

In brief celebration of Ralph's contributions, I will recount just one of his discoveries: a novel way evolved by certain bacteria for preying on others. The predators are sapro­spiras, marine gliding bacteria in the phylum Bacteroidetes. They make long, multicellular, helical filaments that glide on solid substrates at the goodly rate of 2–5 μm/second, presumably the result of streams of extruded surface mucilage. Abundant on marine sand, they subsist, in part, by killing other bacteria and protists, then digesting their con­stituents. How they grab their prey is what's so unusual here. 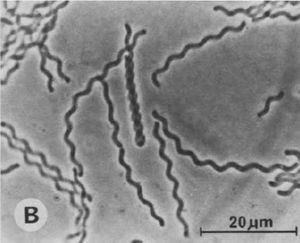 Phase-contrast micrograph of filaments of a freshwater Saprospira sp. Source

Unsuspecting bacteria swimming nearby become trapped when the tips of their flagella become stuck in the mucilage on the saprospira filament. No chemotaxis seems to be involved, just approaching too closely. Dozens of live bacteria still spinning on their axes be­come attached to a single filament, eventually to cover its surface. Extracellular enzymes secreted by the saprospira finish them off. This killing can be observed on agar sur­faces with a lawn of susceptible bacteria; clear plaques are formed by lysis of the prey cells. Not all motile bac­teria qualify as prey. For example, non-marine but fla­gellated cells such as E. coli aren't prey, and only 7 out of 25 marine members of the Vibrionaceae could be caught and destroyed.

Lewin called this phenomenon ixotrophy, which he defined as "feeding on prey caught on a sticky substance such as bird-lime or flypaper." But what is "bird lime?" This sent me on an etymological hunt. Indeed, the Greek root ixo- refers to it: "a sticky material prepared from plants and smeared on twigs to catch small birds that light on it." 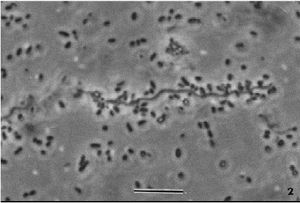 Phase contrast micrograph of Saprospira grandis filaments 1 min after immersion in a suspension of flagellated cells of an oceanic Vibrio. Bar = 10 μm. Source

This is but one example of Lewin's contributions to science and culture. Others earned him the appellation of "father of green algae genetics." He was the first to point out that a primitive marine alga, Prochloron, is the likely ancestor of plant chloroplasts. What else? The list is long. When the polar bears of the San Diego Zoo were turning green, Ralph found out that this was due to cyanobacteria in their hair. Easy to fix, he suggested, by bathing in dilute bleach. Beyond that, he authored a book called Merde: Excursions in Scientific, Cultural, and Socio-Historical Coprology, demonstrating that one could deal with even that subject with elegance and wit.

A small sampling of his informal and creative writings is available online: his musings on the Saprospiras, and a collection of more than 150 of his poems on plants, invertebrates, amphibians, reptiles, birds, mammals, medical topics, memories, food, times, space, travel, places, pollution, religion, politics, songs, etc.

Ralph was an original.

When algae all were bluish-green
And all prokaryotic,
The land (the non-aquatic scene)
Was mostly quite chaotic,

Prochloron cells’ potential role,
Though relatively close, is
Not quite the ancestor we need
For algal symbiosis.